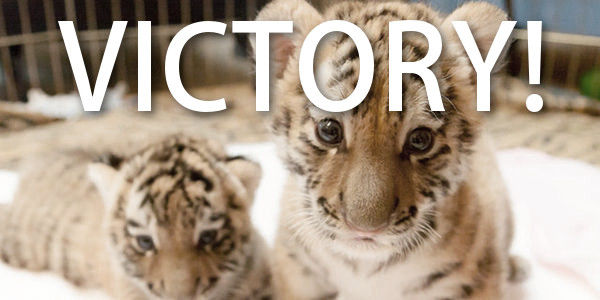 Kalahari Resorts is a popular resort chain with vacation and convention destinations in Wisconsin, Ohio, and Pennsylvania. At a Kalahari resort, guests can expect waterparks, spas, amusement rides - and the exploitation and abuse of hundreds of tiger and lion cubs.

At Kalahari's Wisconsin and Ohio locations, the resort contracts with cruel exhibitors and convicted wildlife traffickers who breed lion and tiger cubs, rip them from their mothers shortly after birth, and then bring them to Kalahari, where they are placed in a tiny glass enclosure until someone pays to pet or take a photo with them.

To ensure that customers get a good photo, exhibitors physically manhandle the cubs -- some so small their eyes have barely opened -- to force them to "pose", often by stressing the cub so much that it stops resisting. Resort guests have seen cubs being swung through the air or held upside down, sleeping cubs being poked with plastic sticks to wake them up, and squirming cubs being pushed and hit in the face until they look at the camera.

What's worse, because there is only a 4-week age window during which the cubs may legally come in contact with the public, Kalahari's "photo cubs" are quickly discarded into the wildlife trade. They may be sold as exotic pets, dumped at roadside zoos, or even slaughtered for their meat and hides!

The man who exhibits lion cubs at the Sandusky, Ohio resort has racked up many violations of the Animal Welfare Act, and has admitted that he slaughters  lions for the profitable exotic meat trade! Meanwhile, in Wisconsin Dells, guests can pet baby tiger cubs courtesy of a convicted animal trafficker who has sold bears to Asian medicinal markets and tigers to animal slaughter rings. During a sting operation, federal agents saw several of his old photo prop cubs being shot in trailers, hung from meat hooks, and skinned in the largest illegal slaughter of endangered tigers in the United States. Yet Kalahari continues to eagerly support and promote not only this man's tiger breeding business, but also his nearby wildlife park, offering vouchers and coupons for it!

By continuing to welcome these unethical exhibitors, Kalahari Resorts is directly responsible for the exploitation, dumping, and slaughter of hundreds of endangered big cats. And because these animals are worth much more dead than alive, they become easy targets for the black market once their time as a photo prop is over. The World Wildlife Fund and TRAFFIC have warned that the thousands of tigers discarded by cub-petting businesses "...are a ticking time bomb for the illegal wildlife trade."

By signing this petition, you'll tell Kalahari that lions and tigers belong in the wild - not resort lobbies.  What's more, until these cruel displays are stopped, you'll be vacationing with a more responsible company!

I am shocked and disappointed to learn that Kalahari Resorts regularly hosts photo and petting exhibits featuring live lion and tiger cubs. These exhibits may be legal, but they are also incredibly harmful to animal welfare, public safety, and wildlife conservation, and Kalahari must stop patronizing them immediately.

For several years, Kalahari has been contracting with privately-owned animal parks that sell photos and encounters with baby lions and tigers in the lobbies of the Wisconsin Dells and Sandusky resort locations. These exhibitors rip the cubs from their mothers shortly after birth and bring them to Kalahari's lobbies, where they are displayed like merchandise in a tiny glass enclosure until someone pays to pet or take a photo with them. Because federal law only allows cubs between the ages of 8 to 12 weeks to be handled by the public, the cubs are quickly discarded into the wildlife trade after growing too large to use for photos, which puts animal welfare, public safety, and wildlife conservation in jeopardy.

To ensure that cubs "pose" for photos at Kalahari, they are physically manhandled by the exhibitors. The videos that guests have taken in Kalahari's lobbies are so disturbing that legitimate wildlife sanctuaries have used them as examples of why cub photo displays are abusive. In one, a newborn tiger, so young its eyes have barely opened, screams in protest as a handler prepares to "pose" it for a photo. Frightened young cubs flinch in the tiny enclosure in the Wisconsin Dells lobby, with nowhere to escape from excited children banging on the glass. A negligent handler fails to notice an unsupervised tiger cub falling off of a 4-foot tall photo platform. Other videos show handlers swinging cubs through the air, pushing on their heads, blowing in their faces, and hitting them in the nose with toys, plastic bags, and other objects -- all for the sake of profit. This is unacceptable, and it's a shame that Kalahari is associated with such abuse.

What's more, the exhibitors that bring the cubs to Kalahari have long, documented histories of animal abuse and wildlife crime.

The Humane Society of the United States warns that William Coburn, who provides animals to Kalahari's Sandusky location, has been cited with dozens of serious violations of the Animal Welfare Act, including using an unvaccinated 3½-week-old tiger cub for more than 50 photos with the public in a three day period at Kalahari Resort, storing bear cubs in a garage, and housing a 6-week-old tiger cub in an enclosure with a cement floor and only a plastic dog kennel as shelter from the sun. There are also reports that Coburn sells African Lions to be slaughtered for the legal, but distasteful, "exotic meat" industry.

Likewise, at Kalahari's Wisconsin Dells resort, cubs are provided by animal broker and convicted wildlife trafficker Mark Schoebel, who also owns and operates Timbavati Wildlife Park. In his book Animal Underworld, investigative reporter Alan Green details Schoebel's long history of wildlife crime. In the 1990s, Schoebel plead guilty to four counts of wildlife offenses for selling black bears that had grown too large for use as "photo cubs" to be slaughtered and shipped overseas to Korea for use in traditional Asian medicine. In 1998, he put human lives at risk by knowingly selling prairie dogs infected with a deadly zoonotic disease. In 2002, Schoebel sold 11 young lions and tigers to an illegal wildlife killing ring which slaughtered the animals in order to sell their parts, and as recently as 2010, Wisconsin state officials investigated Schoebel and requested that he be prosecuted for illegal imports and exports of tigers, deer, moose, and other wildlife.

Are these the men that Kalahari wants to be associated with?

Furthermore, while Kalahari Resorts has made some commendable strides in its' "green initiatives", there is nothing "green" or "responsible" about the exploitation of endangered animals. Scores of conservation and animal welfare organizations, including the World Wildlife Fund, the International Fund for Animal Welfare, The Detroit Zoological Foundation, TRAFFIC, and experts from the AZA's Tiger Species Survival Plan have petitioned the USDA to ban all public contact with baby big cats due to the threat that these "photo exhibits" pose to both animal welfare and the conservation of tigers and lions in the wild. Resort guests are becoming more educated, too. They're learning that what seems like a harmless, special encounter is, in reality, just one brief moment in a lifetime of misery and abuse for these vulnerable young animals, and they're starting to turn away from businesses that support cub petting and photo sales. In fact, over 133,000 people have pledged not to stay at a Kalahari Resort until the live cub exhibits are stopped.

Tiger and lion cubs may be adorable, but they're wild animals; not toys, props, or decorations. The success of Kalahari's new Poconos location, which does not feature live animal displays, proves that guests don't need to touch a tiger to have a good time.

For the sake of animal welfare, wildlife conservation, and Kalahari's reputation, Kalahari Resorts must permanently stop live cub displays at all locations as soon as possible. Until it does, my family will be vacationing with a more responsible business.