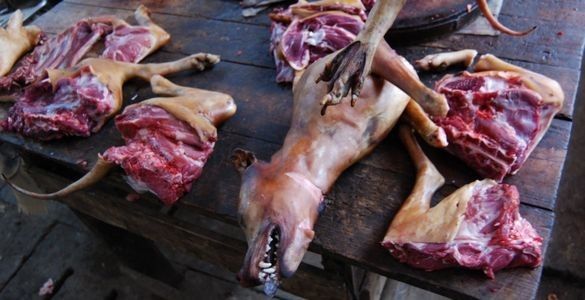 Stop Yulin and Save Dogs from Being Tortured and Eaten!

Since the Lychee and Dog Meat Festival, commonly known as the Yulin Dog Meat Festival, began in 2009, thousands of dogs have been slaughtered for their meat during the 10-day festival each year. Summer is an especially dire time for our furry friends. Each year in June, an estimated 1,000 dogs are boiled or skinned alive, and then butchered for the festival.

The event is highly controversial in China, where animal lovers are banding together to oppose this cruelty. In fact, one of the most horrifying facets of the festival is that pet owners have been victims, too — many of the dogs that are killed are actually household pets that have been abducted from loving homes by vendors who just want extra meat. Countless images show dogs still wearing collars being sent to butcher. Others are helpless strays that have been rounded up to meet their horrific fate.

Even as awful as it is to kill and eat companion animals, it gets worse than that. Many vendors believe that adrenalin makes the meat taste better, so the dogs are often beaten to the point of torture before they are killed. The dogs are then skinned alive and boiled alive.

But international presure is working to stop the Yulin Dog Meat Festival is clearly working. In early April 2020, the city of Shenzhen banned eating dogs and cats completely. A few weeks later, the Chinese government banned the use of dogs as livestock and officially reclassified the animals exclusively as "pets" — not food. Even before then, fewer dogs were killed in recent years due to restrictions on how much dog meat a vendor could sell.

Yet, despite all this, the Yulin festival is still set to happen again this year. We're making progress, but we're not done yet! We must stop Yulin now.

Sign the petition urging Chinese President Xi Jinping to save the puppies and officially ban the Yulin Dog Meat Festival now!
Sign Petition
SHAREShare this petition with friends!TWEETEMAILEMBED
Sign Petition
See more petitions:
You have JavaScript disabled. Without it, our site might not function properly.

Care2
Stop Yulin and Save Dogs from Being Tortured and Eaten!
SHARETWEET