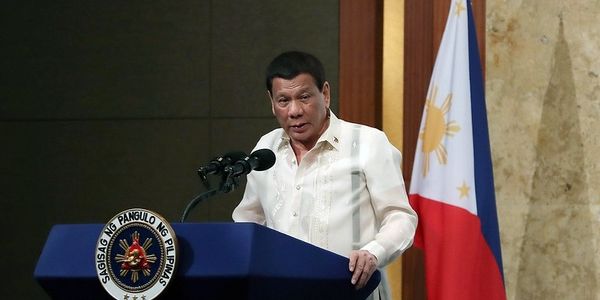 "Hitler massacred three million Jews … there's three million drug addicts [in the Philippines]..... I'd be happy to slaughter them."

Shortly after taking office in 2016, President Rodrigo Duterte said these words in response to criticism of his 'war on drugs' in the Philippines. By then, close to 4,000 people had been murdered by police without being arrested, charged, or given a fair trial -- otherwise known as extrajudicial killings -- all because they were suspected of drug related crimes.

Families describe being woken up in the dead of the night by hoards of state agents armed with guns, while a beloved cousin, sibling, or parent is pulled out into the darkness. Then their loved one is never seen again.

By September 2020, Duterte's 'war on drugs' had claimed almost 10,000 lives according to government sources, but human rights groups fear the real number could be as high as three times that. And then, in many cases, their bodies are dumped into mass graves. Despite all of these murders at the hands of police, courts have convicted only one officer of crimes.

This is a gross violation of human rights. Sign the petition asking the United Nations Human Rights Council to begin an investigation immediately into these extrajudicial killings and the many, many other rights violations occurring in the Philippines!

Drug addiction is a disease, not a crime. The real crimes are the state-sanctioned mass murders being carried out by a man who embraces being compared to one of the deadliest dictators in history. Plus, the drug trade allegations against many of the murdered are false. There is no telling how many people are being killed for other reasons and then posthumously labeled criminals just to justify their executions.

Over 30 human and civil rights groups from within the Philippines signed a letter that was sent to the UN Human Rights Council begging for swift and strong action. These groups are on the front lines of this crisis, and they know best what needs to be done. Meanwhile, the Phillipine government has been paying lip service to the UN, boasting empty promises of investigations into 6,000 of police-perpetrated murders. The UN must listen to the former, and hold accountable the latter. If they don't, the bodies will continue to pile higher.

Sign the petition and implore the UN Human Rights Council to open an investigation into horrific amounts of blood that have been spilled by the Duterte administration for four painful years. These extrajudicial killings cannot go on a moment longer!