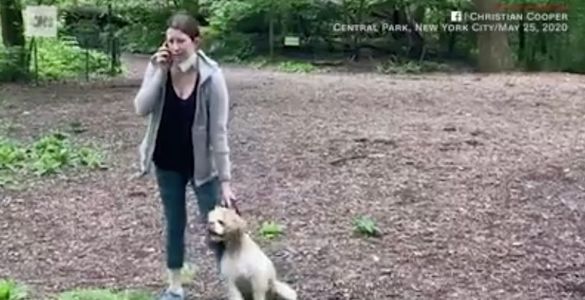 She Called 911 to Falsely Accuse a Black Man While She Abused Her Own Dog!

UPDATE: Amy Cooper has been charged with filing a false report! But in so many of these instances, when public pressure lets up, folks like Amy Cooper get away without actually being convicted. She also got her dog back after surrendering him, but there has been no mention of an animal abuse investigation. Keep signing and sharing the petition so that Amy Cooper is fully brought to justice!

In May of 2020, Amy Cooper tried to sentence an innocent black man to death. In footage taken by Christian Cooper, the man Amy Cooper attacked, she is seen in a tranquil part of Central Park in New York, where Christian Cooper was trying to bird watch -- one of his favorite hobbies. Her dog is off leash, which is banned in that particular section of the park. When Christian Cooper kindly reminded her of this, citing that the dog was scaring all the native birds away as his concern, Amy Cooper called the police. What followed was a horrifying display of racism, hate, and even animal abuse.

Sign the petition and demand that the NYPD to charge Amy Cooper for false reporting, and then investigate her for possible ongoing, horrendous animal abuse against her dog, Henry!

The video is heartbreaking. Amy Cooper convincingly plays the part of panicked and hysterical while calling 911, spitting at Christian Cooper, "I'm going to tell them there's an African American man threatening my life." In the United States, where black and brown bodies are gunned down by police with no discretion, this is a death threat. She knew that, otherwise she would not have mentioned his race. If you just heard her voice, the faked panic is so piercing you'd think she was about to get murdered. But in fact, what the video reveals is that she is 20 feet from Christian, who is not threatening her or advancing on her in any way, merely asking her to leash her dog to protect local wildlife! Luckily, both Christian and Amy were gone by the time police arrived on the scene, or this woman's lies could have cost Christian Cooper his life.

But the audio is not the only devastating part of this footage. As the video begins, Amy Cooper hurls threats at Christian Cooper as she stands above her sweet Cocker Spaniel, Henry. Then, in an instant, Ms. Cooper grabs Henry's collar and rips him up into the air, so high that his front legs are not touching the ground. She is hanging him. The video is over a minute long, and for those agonizing 70 seconds, Henry is dragged and hung. You can hear him gasping for air and see him squirming to get free, desperate to breathe.

Mercifully, Amy Cooper surrendered Henry to the rescue from which she originally got him after the footage made its way around the internet. Something else on the internet, however, has raised red flags for animal welfare advocates -- Henry's personal Instagram account. On the account, Amy Cooper posted photos and videos of the Cocker Spaniel, captioning them with his voice. And a concerning amount of these posts involve injuries that Henry has suffered -- dog attacks, near-drownings, choking on foreign objects, and ripped out toenails to name a few. These injuries are far too frequent, and seemingly publicized to gain attention and sympathy. This is beyond concerning.

Someone who is willing to call the police on a black man and fabricate a threat to her life is terribly dangerous, as is someone who is willing to abuse innocent animals for recognition and pity. Amy Cooper has been laid off from her job and lost her dog, but that does not mean she will not cause more living beings harm for as long as she is allowed to. That's why the New York Police Department MUST charge Amy Cooper with false reporting and investigate her for animal abuse! Please sign the petition today to demand it!
Sign Petition
SHAREShare this petition with friends!TWEETEMAILEMBED
Sign Petition
See more petitions:
You have JavaScript disabled. Without it, our site might not function properly.

Care2
She Called 911 to Falsely Accuse a Black Man While She Abused Her Own Dog!
SHARETWEET