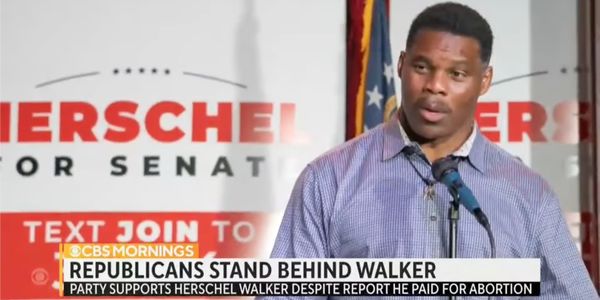 The Republican Senate candidate Herschel Walker says he wants to completely ban abortion, with "no exception" for rape, incest, or the life of the mother. However, it seems that those rules don't apply to Walker's own life. A former romantic partner came forward with receipts showing that Walker paid for her to get an abortion in 2009. In addition to his blatant hypocrisy, Walker has a history of violence towards his partners, family, and employees. If he's capable of lying like this, what else is he covering up?

Sign the petition to demand the Department of Justice investigate Herschel Walker for the allegations of abuse against him!

According to police records, Walker's abuse towards his partners date back to at least 2001. Walker's ex-wife said he held a gun to her head, convinced he was going to "blow [her] brains out" and now, his son Christian Walker has come out backing up the alleged abuse claims.

"Every family member of Herschel Walker asked him not to run for office, because we all knew (some of) his past. Every single one," Christian Walker tweeted. "I know my mom and I would really appreciate if my father Herschel Walker stopped lying and making a mockery of us. You're not a 'family man' when you left us to bang a bunch of women, threatened to kill us, and had us move over 6 times in 6 months running from your violence."

Walker, who is a supporter of Trump, is running in one of the most important races in the country. He's aiming to unseat Democratic Senator Raphael Warnock – and the outcome could determine which party controls the Senate.

Sign the petition to demand the Department of Justice investigate Herschel Walker for his allegations of abuse!