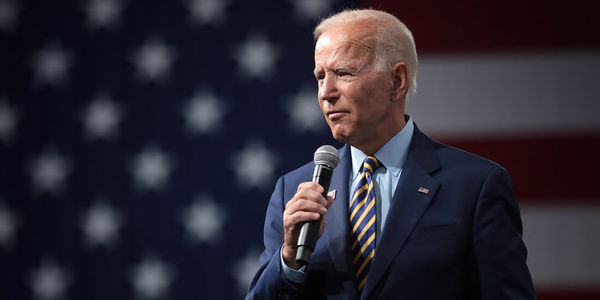 Trump is trying to steal our country. Vote for Biden to show him who's boss!

Right now is a scary time for people in the U.S. 2020 has already been a painful, heart-wrenching wreck of a year, but now that the presidential election (and more!) is upon us, a new form of existential angst is gripping the country.

And it's no wonder. We are currently being "governed" by a cruel would-be tyrant who contracted the deadly COVID-19 disease and then accused his opponent, Joe Biden, of not being fit to become president simply because he (Biden) has been too smart to catch COVID. This is a man who continues to advocate for jailing his 2016 political opponent and has cost our country more than 200,000 human lives lost to COVID. A racist xenophobe whose administration has thrown children in cages and egged on white supremacist militias.

And right now, this same man, Donald Trump, has openly admitted to trying to stage a coup d'état. He has threatened to not peacefully leave the White House in January, and has continued to call on foreign adversaries to intervene in the election in order to help him win. He will go to absolutely any lengths in order to avoid losing political power — and that's why we have to do everything we can to make sure he does lose.

Pledge to vote for Joe Biden for U.S. President and then vote Blue, up and down the whole ballot!

This might sound like the end of the road: like, if Trump is refusing to leave, there's nothing we can do. But that is FALSE! As long as we have an overwhelming tide of voters turning in their ballots early or voting in-person to make sure their voice is heard on time, Trump won't be able to argue that he "should" have won. If enough of us pledge to vote for Biden and then follow through, WE. CAN. WIN.

Even if Trump tries to steal the election, we can tie his hands legislatively. If Democratic leaders control the Senate, the House of Representatives, state governorships, state legislatures, local offices... Trump will be S.O.L. And we need to make that happen.

Because it's not exclusively about Trump and the Executive Office. Right now, we're also mourning the recent death of feminist icon, former Supreme Court Justice Ruth Bader Ginsberg — and trying to prevent an anti-choice, anti-healthcare right-wing ideologue from taking her seat. We're also trying to protect and expand the Affordable Care Act to cover all people, and to pass new legislation protecting the executive branch from future Trump-esque abuses.

We all need a little hope right now. And luckily we have an opportunity. It's time to Vote Blue all the way down the ballot, and make sure that no matter what Trump tries to pull in November, we've got Democratic lawmakers ready to stop him.

Sign the pledge promising that you'll vote for Democratic Senators, Representatives, state and local leaders, and of course Joe Biden!
Sign Petition
SHAREShare this petition with friends!TWEETEMAILEMBED
Sign Petition
See more petitions:
You have JavaScript disabled. Without it, our site might not function properly.

Care2
Trump is trying to steal our country. Vote for Biden to show him who's boss!
SHARETWEET