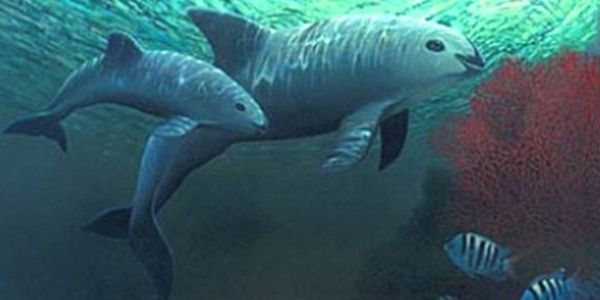 Save Snub-nosed Porpoise From Death and Extinction

Please sign an share this petition in an effort to save this gorgeous being, the Vaquita porpoise that is one of the most endangered of the marine mammals living today. The Vaquita lives predominantly in the uppermost Gulf of California, Mexico and we need to get efforts combined from Mexico, U.S. and Chinese Governments in order to preserve their existence.

The Vaquita is a small porpoise with an endearing unique facial markings, the smallest of all whales, porpoises and dolphins that lives in the uppermost Gulf of California, Mexico. This little porpoise is in danger of extinction and the only way to prevent this happening is if the Mexican, U.S. and Chinese governments take immediate and coordinated action. The Mexican Government itself showed evidence that the Vaquita is running out of time way too fast; their populations is declining very rapidly. Please read this alarming info regarding this beautiful animal - http://www.nytimes.com/2014/09/15/world/americas/a-vaquita-is-ensnared-by-criminals-and-nets.html?_r=0

Half of their numbers declined just in the last three years. Just a few years ago, more than 200 Vaquitas existed but their numbers are less than a 100 of the species. Many of the mammals are lost to drowning in fishing nets, both legal and illegal. It is estimated that about 20 percent of their population is and will be lost due during the next fishing season.

A large fish known as the Totoaba is also a threat to the Vaquita. Entanglement in gillnets set for Totoaba was the primary cause that brought the Vaquita to low levels by the mid-1970s. Totoaba were overfished by the mid-1970s, and the species was listed as endangered by Mexico in 1975, and by the United States in 1979. But this fish is again resurged by illegal fisherman who look to profit from its "swim bladder", an expensive delicacy in China. These swim bladders are smuggled across the border to the U.S., then shipped to Chinawhere a kilogram can be reportedly worth much more on the black market -- leaving thousands of dead Totoabas and tens of drowned Vaquitas to rot.

The Mexican authorities are working to preserve the existence of the Vaquita, allocating monies to do so. Most of this money has been used to compensate the fishermen affected by the creation of a Vaquita refuge in 2009 and to assist those wanting to switch to safer fishing techniques. Such safety measures also included the elimination of all shrimp gillnets, in which Vaquitas are caught, through their gradual replacement with a newly developed safer net within three years.

Despite all efforts and measures taken, the Vaquita will be lost unless the illegal Totoaba fishing is stopped immediately. Much more needs to be done or we are going to lose all Vaquita porpoises. It is still possible to save the Vaquita, but this is clearly the last chance. We call upon the governments of the United States, China and Mexico to take swift action to save this unique and beautiful species for present and future generations.

Please sign an share this petition in an effort to save this gorgeous being, the Vaquita porpoise that is one of the most endangered of the marine mammals living today. The Vaquita lives predominantly in the uppermost Gulf of California, Mexico and we need to get efforts combined from Mexico, U.S. and Chinese Governments in order to preserve their existence.

United States, China and Mexico Government Officials, Barack Obama, Premier Li Keqiang , and Pena Nieto -Please take stepsto stop the illegal fishing of Totoaba by even stronger enforcement of the gillnet ban and to extend the refuge boundaries to cover the entire Vaquita habitat. This means eliminating all gillnet fisheries within the expanded refuge and compensating the fishermen, while allowing for a transition toward new gear that catches shrimp but not Vaquitas. President Barack Obama, we ask you to take swift and decisive action through the newly created White House Wildlife Trafficking Group. The first immediate step is to scale up the already significant law enforcement efforts on transborder shipments of Totoaba products. Finally, we urge China Premier Li Keqiang to immediately stop the illegal entrance of Totoaba products.  Please band together and save the Vaquita porpoise from extinction and endangerment!

Care2
Save Snub-nosed Porpoise From Death and Extinction
SHARETWEET