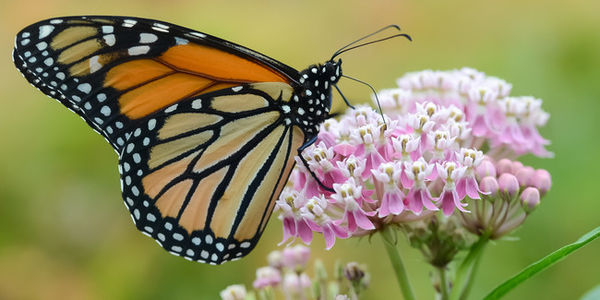 Every year, monarch butterflies - the majestic creatures that showcase brilliant black-and-orange striped and spotted wings - perform a great migration. Wintering in temperate areas of Mexico, the butterflies then swoop 2,000 miles up north to summer in Canada and the eastern half of the U.S. It takes these winged creatures two to three months to finish each of their biannual migrations. Whole beautiful hoards of them can be spotted covering puddles or trees if you know where to look.

But despite their majesty and their seemingly grand population, monarchs are dying.

Sign the petition to demand protections for monarch butterflies now!

Over the past decade or so, upwards of half of the monarch butterflies that usually migrate to Mexico have failed to show up - dying off or never being born at all. Half have vanished from the skies and trees. There are many reasons - climate change, historical logging, and deforestation. But one of the other biggest contributors to monarchs' shocking die-offs is the destruction of milkweed plants in the U.S.

Milkweed feeds monarch butterflies when they are but baby caterpillars - it's the one and only thing these wee ones can eat. But milkweed has been devastated in the U.S. due to industrial farmers that either chop down the plants or spray such copious amounts of herbicides that the plants simply can't survive. As this famine of milkweed plagues caterpillars, so too it plagues the butterflies those caterpillars become, and now - as a result - these black and orange insects that streak across our skies and bring so much wonder to our lives could die out.

There's one clear way we could fight back against this milkweed and butterfly extinction: getting the U.S. government to finally list these precious creatures as endangered - which they are!

Back in December 2020, the U.S. Fish and Wildlife Services concluded that "listing the monarch as endangered or threatened under the Endangered Species Act is warranted" but despite this, the agency declined to actually list or protect them. Why? Correctly categorizing monarch butterflies as endangered was apparently important enough compared to "higher priority listing actions." Luckily, though, the government stated that since monarchs are now officially a "candidate" for listing, staff will conduct a new review every year to decide whether or not to protect them.

Well, it's been a year. The U.S. Fish and Wildlife Services must officially categorize monarch butterflies as an endangered species under the Endangered Species Act! Doing so would mean their habitat and food sources would be protected, and the government would be required to take action to ensure the species' survival. Sign the petition now!
Sign Petition
SHAREShare With FriendsTWEETEMAILEMBED
Sign Petition
See more petitions:
You have JavaScript disabled. Without it, our site might not function properly.