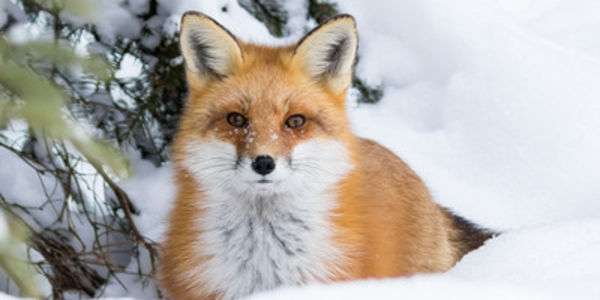 Some humans tricked this fox into feeling comfortable around people. Then authorities killed him.

Feeding wild animals isn't a kindness. According to experts at U.S. national parks, it's "actually a form of animal cruelty." While we think we're doing something sweet by providing animals like foxes with leftovers or other food, in truth, we're entrapping them — teaching them to trust humans, get near us, and wander near our cars hoping to find more food.

The animals don't know any better. But the price for their trust is usually death.

And that's exactly what happened with one sweet, helpless fox at Grand Teton National Park in Jackson Hole, Wyoming. After countless incidents of seemingly well-intentioned tourists providing the innocent fox with food — sometimes enticing them to get beautiful close-up photographs — the fox began feeling friendly around humans.

And all too soon, he was considered a danger to human society. On Monday, February 8, 2021, he was euthanized because of this — something that was entirely beyond his control.

Sign the petition to demand that parks save these creatures' lives! They must hold humans accountable for feeding wild animals, and send human-friendly wildlife to reputable sanctuaries.

This particular fox (named "15M") was actually part of a research project. Researchers had placed a tracking collar around his neck back in 2018 so that, while he did his wild-living thing, they could learn about his habits.

Yet only 3 short years later, residents in Jackson Hole saw a fox that may have been 15M. He'd been coaxed over by a group of human photographers who wanted him to stand nearby for their photo shoot. The resident saw one photographer wave a bag of food to trick the fox into coming over, and yell at it: "you better do what I tell you or I'll take out my gun and shoot you."

Shortly afterwards, 15M had been caught in a box trap. And he was killed — euthanized — to protect the public, because he'd gotten too comfortable in our company.

This was not this fox's fault. It's not these wild animals' faults in general. We set up the situation. We had our laughs and giggles getting photos and feeling "dangerously" close to them. They have no idea what's going on, so they oblige. And then, once our fun and games and photoshoots are done, we blame them. And we kill them.

Tell U.S. park service authorities to send human-habituated wild animals to reputable sanctuaries instead of euthanizing them, and to instead go after the people who tricked them with food!
Sign Petition
SHAREShare this petition with friends!TWEETEMAILEMBED
Sign Petition
See more petitions:
You have JavaScript disabled. Without it, our site might not function properly.

Care2
Some humans tricked this fox into feeling comfortable around people. Then authorities killed him.
SHARETWEET