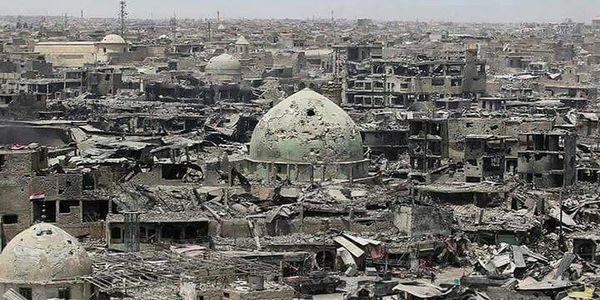 The population of Mosul cannot find peace and security with any of the institutions of the Iraqi State, and with their city lying in ruins they cannot find a place to shelter. The dominance, by the sectarian and tribal militias, of the political life in the city makes any revival role by the experts of the civil society impossible.

Security has been a serious issue in Mosul since 2003.

First, because of the sectarian policies of the Iraqi security forces that humiliated the population and refused to listen to their peaceful demands, and enacted a policy of detentions without trial.

Second, during the ISIS occupation (following the utter failure of the Iraqi government to defend the city),

And finally during the battle to retake the city. A battle in which the Iraqi government ignored the advice and warnings of military experts and encircled ISIS inside the old city, used excessive force and random "dump" weapons to kill more than 40 thousand innocent civilians in the city. Iraqi government forces have been implicated by the United Nations and a multitude of human rights organisations in this crime that has resulted in the destruction of the city.

The catastrophic price for the battle (in terms of lives and the destruction of the city's infrastructure) can be appreciated when compared with the liberation of Tel Afar from which ISIS were allowed to withdraw and the town was peacefully re-taken sparing the city and its population.

Worse than square one

The political result of this battle is that the city is once more in the hands of the sectarian militias that have now been incorporated within the apparatus of the State, levying taxes and conducting acts of kidnapping, extra judicial executions, and the confiscation/destruction of private property while wearing police and army uniforms. Government sponsored militias are actively changing the political map of the city to influence the results of any future elections, a behaviour not befitting a member state of the United Nations and is more reminiscent of the total chaos that follows the failure and collapse of the State, as was the case in Bosnia and Kosovo for example.

Today, the children of Mosul have to prove their innocence from the accusation that they cooperated with ISIS that can be made by any militiaman, resulting in a swift death in front of the iphone cameras.

The destruction of Mosul has been estimated at anything between 70% and 100%; the coffers are empty and the government is corrupt. Who will rebuild Mosul and with what funds? The answers are becoming clearer to the people of Mosul.

The results of leaving the plight of Mosul unattended would be catastrophic for the city of Mosul and its population. These include:

The ethnic cleansing on sectarian lines to change the demographics of the population.
The destruction of the culture of religious and ethnic tolerance for which the city is renowned and which the region is in much need for.
The removal of a major centre of civilization in the region, that has long acted as an intellectual safety valve.
The creation of a drug economy based on the influence of powerful War Lords.
The rise of a vice-based economy.
Mysterious monies made available to buy land and real-estate in Mosul at tempting prices.
The transformation of the character of city's population from that of an ancient centre of civilization to one of refugee camp dwellers, and the creation of a new generation of millions of uneducated, helpless young people and extremists.
The destruction of the cultural, artistic, intellectual and artisan folk heritage of Mosul society.
Control of the Mosques in the city for aims that do not serve the city and its people.

These changes will not be reversible with time. This chronic political failure and the record levels of corruption in Iraq have transformed the institutions of the State (the constitution, Parliament, the judiciary and the security forces) into an ethnic/sectarian battleground. This has crippled the instruments of the State and made it impossible for the Government to be held accountable in the normal way.

The situation is made worst by the inability or unwillingness of the Iraqi government to follow the norms that govern the relationship between a government and its population as defined by the United Nations. The situation also makes it near impossible for Mosul's civic society to make any form of meaningful contribution toward finding a solution based on the experiences of other nations.

The destroyed city of Mosul (named Hiroshima's twin) is facing a stark conundrum: No re-development without scrupulous, competent administration; no honest administration without security; and no security without the removal of State sponsored militias from the city.

The cost of this conundrum is colossal.

Security is the key to the rehabilitation of Mosul. The population of the city cannot find peace and security with any of the institutions of the Iraqi State, and the only remaining viable option left in the face of the annihilation of the city is to seek international protection for the city.

In light of these considerations, Mosul society represented by its professional sons and daughters calls the United Nations to declare Mosul a "Disaster City" and provide protection for its citizens to fulfil the following vital duties:

Provide security and international supervision on the removal of militias from the city.
Oversee the removal of corrupt, government appointed officials from city offices and institutions.
Enable civic society to form a temporary, apolitical administration to run the city and prepare for future elections to determine the nature of city governess.
Oversee the allocation of part of the national oil revenues (as an Oil for Redevelopment and Compensation Programme) to be deposited in a special fund together with any international donations.
International supervision of the funding and execution of all redevelopment projects.
This catastrophic state of affairs was predicted by the Mosul Foundation before the battle. The Foundation warned of the result of this battle and put forward a realistic road map to deal with the situation.

Today, and after what we had predicted sadly became a reality, Mosul requires the support for this road map.

We invite the sons and daughters of Mosul from all walks of life, professions and specializations to give support to this petition which will be submitted to the United Nations Security Council.

This petition was initiated and supported by: