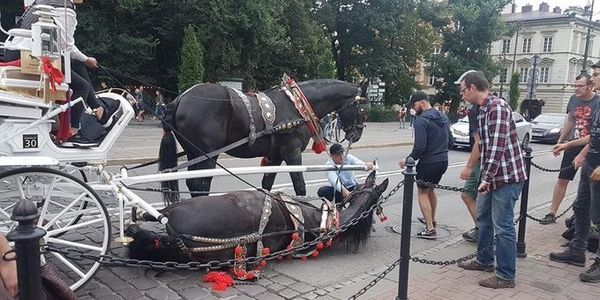 Horse Drawn Carriages for Tourists in Cities are Abusive and Wrong!

Rome has recently joined the several dozen cities worldwide who have banned horse drawn carriages in cities. The reason for the ban is that these horses are often abused, overworked and under cared for. Horses are not meant to walk on scalding hot or freezing cold asphalt all day long. Again and again we see these horses get severely injured and even killed while being forced to pull tourists around for joy rides. Unfortunately, the practice is still legal in many other cities.

Will you join us in calling on the popular tourist cities of Los Angeles, United States and Madrid, Spain to also ban horse drawn carriages on their streets?

This industry might seem innocuous because horses have pulled carriages for a long time. But the past was a totally different context before we had other options. Now, these horses work long hours in sweltering hot or freezing cold conditions. Additionally, horses are not meant to be in stressful, loud and polluted cities or walk on asphalt. In fact, this is why so many horses in the industry end up with significant injuries and even death!

There are stories popping up all the time of horsing collapsing on city streets because they've been pushed past their limits by abusive owners who just want to exploit them for profit. People who really love horses would never make them pull carriages in the city. Often the horses in these industries are also not housed or cared for well when they are off duty. They may work 7 days a week and go back to barren and tiny shelters with improper medical care and sustenance.

We want Los Angeles and Madrid to ban this practice because other cities in those countries have already realized how abusive street based horse drawn carriage industries are to the animals involved. In the United States, these rides are banned in Chicago, New York, Las Vegas and parts of New Jersey and Florida, among other places. Worldwide, many popular cities have banned it as well, including Paris, London, Mumbai, Istanbul, Guadalajara and of course Barcelona in Spain. This shows that these countries already know how bad this industry is.

Will you sign the petition asking Los Angeles and Madrid to be the next two cities to ban horse drawn carriage attractions in their cities?

Care2
Horse Drawn Carriages for Tourists in Cities are Abusive and Wrong!
SHARETWEET