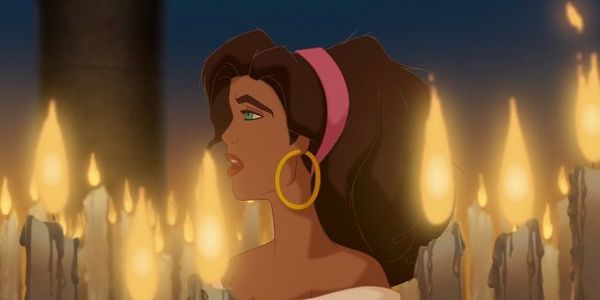 When I was a child, Esmeralda was recognized as Disney Princess. I have no idea if she was included on the official lists, but there was a lot of merchandise of her available in the stores, she appeared in the Disney Princess magazine regulary and together with Tinker Bell she was even included in the first Disney Princess dolls line that ever showed up.
Esmeralda was my favourite from all nine contemporary princesses, because she was kind, caring and fearless character, and I was proud when while watching her in The Hunchback of Notre Dame I heard her uttering sentences like "You mistreat this poor boy the same way you mistreat my people. You speak of justice, yet you are cruel to those most in need of your help!" and "What do they have against people who are different". Esmeralda stood up for her own opinions, she respected other people's differences, she was the first person who befriended Quasimodo, while everyone else was feared or disgusted by him. She showed up a huge tolerance and she was simply interesting character. As one of the first Disney leading ladies she was outspoken, and sassy. Thanks to that millions of people have fallen in love with her.
All those features I have counted above make her a true role model. That's why I'm so disappointed that kids those times can't get to know that wonderful role model. Esmeralda is no longer featured in Disney Princess merchandise, the last time she had shown up was nearly 2004. There is no products available with her in the Disney Stores. A huge amount of kids probably doesn't even know her bacause they simply have not seen her anywhere, however, those who had seen her movie had loved her immediately and they can't even buy a single doll of her, because one doesn't exist.
Personally, I think Esmeralda should be brought back to the Disney Princess franchise. Maybe she is not a princess, but she is widely known among her people in the movie, and the slogan of Disney Princess says that "Every Girl Can Be A Princess". The line already include Mulan and Pocahontas, which aren't royal either. Wasn't the whole idea to promote good examples of role models for children? Well, I can't think of better example than Esmeralda.
Especially today, when Disney in association with Hasbro has decided to promote the strong and active side of princesses and their passions, among others by spreading worldwide well received campaign "Dream Big, Princess". Esmeralda is both strong and active, she has her own opinion and she is not afraid to utter it, she's fighting for freedom of speech, respect and equality, and for equal rights for her people. She's against injustice and she doesn't give up on her beliefs even under the threat of death. She's selfless and generous. She also has her passion, which is dance, that millions of children also love and practice. She's the perfect material for an official Disney Princess.
One more reason why Esmeralda should join Disney Princess brand is the fact that she's Romani and she's the only Disney Romani heroine, in fact the only Disney representation of that unfortunately still widely unrespected ethnicity. Disregarding her among Disney Princess line is another example of disregarding Romani people. We all know how important representation is, especially, especially for children, and how much Romani people still need it.
According to Hasbro, the company which has the license for Disney Princess franchise, representation is also important for them and Disney. In their latest interview they said, I quote, "Toys R Us’s flagship store in Times Square is 110,000 square feet and sells toys to millions of children every year, but right before Christmas this year, it had only one Tiana toy. That will change with Hasbro. We can reintroduce Mulan, says Hopelain. We can play up that Tiana is a great cook.". Amongst 11 official princesses, only four of them have skin tone different than white. Why shouldn't we use the fact that Disney has Romani heroine amongst their female characters, which in addition is a great role model?
Summarizing, I would like to ask Disney and Hasbro companies to add Esmeralda to the official Disney Princess line-up. Esmeralda is both the great example for children, and the very needed representation for the Disney Princess franchise.