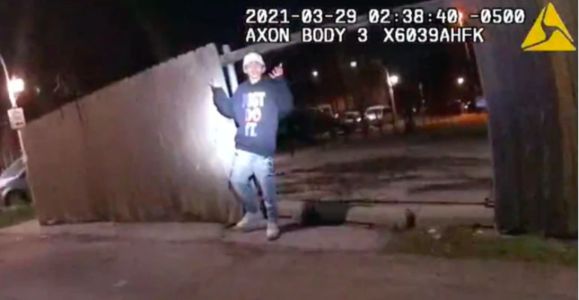 Yesterday, April 15th, the very weak oversight body for the Chicago Police Department (CPD) was finally forced to release footage of the cold blooded murder of 13-year-old kid Adam Toledo by police. The video is as awful as it sounds and while you may wish to view it, please do not share the video on social media. Adam was a Latino seventh grader at Gary Elementary School. He liked legos and riding bikes with his friends. He was a child and he was murdered, and he was actually only 1 of 3 young people murdered by CPD that same week.

Sign the petition to demand that Chicago defunds CPD. Officer Eric Stillman who killed Adam must also be fired. More training and "reforming" is just money down the drain, and any version of these so far clearly hasn't worked. Cops shouldn't be responding to most of the things they are called to do.

Before the video came out, Chicago Mayor Lori Lightfoot said Adam had a gun, but no gun is visible in the body cam footage. And even if there had been a gun, Adam was shot when he was told to put his hands up and he did. He was empty handed and complying, but they shot him in the chest and killed him anyway.

CPD has a bloated budget already. In fact, 65% of the federal money that came to Chicago through the CARES Act was given to CPD instead of the struggling families across the city or programs that could actually help them. Whereas cops continued to police with impunity, often without even doing the bare minimum of wearing a mask. In a normal year, CPD still gets nearly 40% of the entire city's budget. But they don't keep us any safer.

In fact, after Officer Eric Stillman shot Adam Toledo in his own neighborhood, police supervisors instructed all cops in the area to turn off their body cams. Stillman is on 30 days paid leave and so far, his lawyer is claiming he will face no charges. Since September 2017, 4 use of force reports and 3 complaints have been filed against this officer. As someone who has spent time with this open source data, I can tell you that is not an insignificant number. Since the process can't really guarantee anonymity, way fewer reports are filed against violent officers than are actually happening.

Sign now to demand CPD loses some of their funding and it is reallocated into actual community services. Also sign to demand officer Stillman loses his job as a police officer!