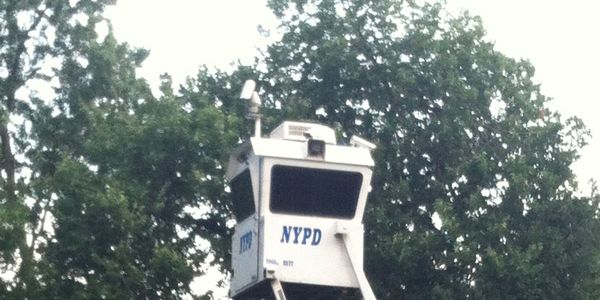 TAKE DOWN THE POLICE TOWER IN TOMPKINS SQUARE PARK

Recently, an article was printed in the NYPost, then repeated in the Observer, about how a 19 year old NYU student was afraid to walk through Tompkins Square Park. One day later, the park was overflowing with police on foot and in patrol cars ( we do have patrol cars normally that scan the park throughout the day, as well as Department of Parks vans, ACC vans). Two days later, Bill Bratton showed up, homeless people were removed, then one day later, you, the mayor showed up.

So your response is to pander to them, and to the publisher of the New York Observer, a landlord. Neither of them live here. Please listen to the people who do live here, and frequent that park, morning, noon and night.

The park, in reality, does have one or two benches occupied by homeless people. Some of them are, in fact druggies. Some fall down and can't get up. When this happens, we call the police and ambulances. They do spread trash, occasionally bum cigarettes... The park's response? They've removed the trash bins. There are also the crustie kids that show up in the parks every summer. Dirty, sometimes on various drugs or alcohol, sometimes getting into fights... no one is saying this isn't unpleasant. This accounts for a very small percentage of people who are in the park everyday. Mostly, the park is filled with parents with kids, dog people, scooters, runners, bike riders, skate boarders, flowers, lawns, people sitting on the grass reading, sitting on benches commiserating with their friends, neighbors, listening to music, the occasional conga players, musicians performing, photographers, painters, gardener, park workers (who do not respond to complaints of any sort, even dead rats), none of whom feel unsafe.

We appreciate the efforts of the 9th Precinct doing their job. On foot. In patrol cars.

You have let the NY Post, Rupert Murdoch, The New York Observer and Jared Kushner, a developer who owns upwards of 30 buildings in the neighborhood, and 20,000 additional apartments in the city, to dictate how you treat the citizens who voted for you... Jared Kushner talks about 'taking back the neighborhood'. But it isn't his neighborhood. He doesn't live here. He collects rent here, and is married to Ivanka Trump, I cannot even think he voted for you. The people of the East Village are your constituency, though, and we supported you. Now we are demanding you support us.

Find a solution to homelessness. Not the creepy, filthy, dangerous shelters homeless people fear and stay out of at all costs. But real forever homes for people who need to rediscover human dignity. Find help for drug addiction. Find mental health facilities to aid those with mental health problems.

When you move these people out of the park, and keep them out, they wind up sleeping and urinating in our adjacent doorways. Create pathways to homes and health care and food for the homeless. Homelessness is not a crime. It is not illegal to sit on park benches, no matter who you are.

There is no crime happening in the park that cannot be handled by foot police or officers in patrol cars. The precinct is just around the corner, patrol cars find their way into the park on a moment's notice.

Take down the tower. We don't want it. It makes us feel violated, insulted and angry that you chose this path under the guise of protecting us.

Take down the tower. We don't need it. It is overkill and just a display of muscle that infringes on our enjoyment of the park.

Take down the tower, Mr. Mayor. Take it down. Today.