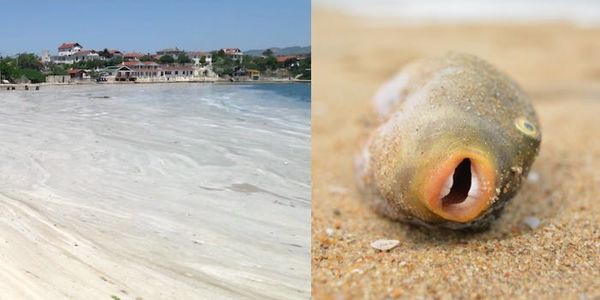 It's called "sea snot," and it's a nasty looking, thick, off-white layer of "mucus" that's covering the water off the coasts of Turkey — and wiping out marine life below.

Sign the petition to save marine animals and coral reefs before it's too late!

While sea snot tends to cluster towards the surface of the water, it can actually extend as deep as 100 feet below. Some scientists have been filming themselves diving down to the bottom of the Sea of Marmara, and they're even finding it there, too.

This kind of slime is not just gross to look at. It's also murderous. As the snot clusters, growing more and more dense, it blocks out light and even oxygen, robbing marine plants, fish, crabs, seahorses and more of vital resources. In fact, it's so thick, videos show researchers in some cases actually bouncing heavy objects directly off the snot, without even breaking through its membranes. On top of that, sea snot provides the perfect petri dish for deadly bacteria and microorganisms to develop and grow, E. coli being one frightening example.

As a result, several towns have seen mass die-offs, with thousands of fish turning up dead and crabs suffocated to death by mucus clumping in their gills. Entire coral reefs have been cloaked in snot, morphing from bright, vibrant ecosystems into skeletal remains. All of this is horrifying, but locals are worried this may just be the beginning.

Sea snot isn't coming out of nowhere. It's a biological phenomenon in response to warming waters from climate change. When that's combined with pollution from sewage and agricultural run-off, the mixture is toxic — and sea snot is the product.

To save wildlife, we need to stop sea snot! And to do that, we need to crack down on pollution and fight climate change.

Tell the Turkish government to increase restrictions on sewage and agricultural run-off, pass stronger anti-pollution measures, and commit to zeroing out their net carbon emissions!
Sign Petition
SHAREShare this petition with friends!TWEETEMAILEMBED
Sign Petition
See more petitions:
You have JavaScript disabled. Without it, our site might not function properly.