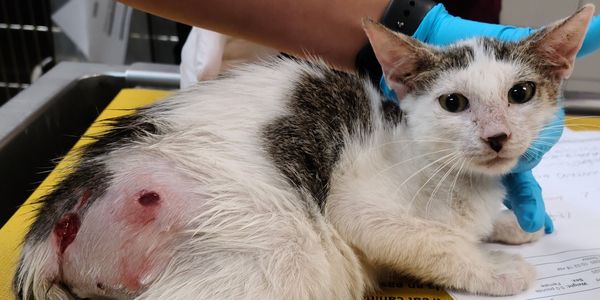 Cats are being hunted and shot for fun in this Florida neighborhood!

Walking through many neighborhoods across the United States, one can expect to see a cat or two. Stray cats are common, normally able to live happily and fend for themselves. And many families own pet cats that spend part of their time outdoors, sunbathing or chasing bugs and rodents. But in one neighborhood in Tampa, Florida, the idyllic lives that many of these outdoor cats live are in jeopardy. Some malicious person is going around and shooting innocent cats with a BB gun for no reason other than their own amusement.

Hillsborough County Animal Control is investigating the matter, but in such a violent and upsetting case, they need to know just how urgent it is to find this person. Sign the petition and urge them to do everything in their power to find and stop this person before many more cats are hurt -- or killed!

At least seven cats have been shot in just the span of the week, and those are only the known cases. BB guns may seem more "playful" or less lethal than other types of firearms, but that is far from the case. Many neighbors have reported the sad sight of cats, sunbathing or walking about, with bullet wounds on their bodies. Who knows how many other cats have been targeted and shot, then have hidden in fear or died alone. Three cats are known to have died from the painful gunshots and subsequent infections. One of them was just a three-month-old kitten, a sweet girl named Flower.

But so far, no one has witnessed the horrific act. This person is still at large, hunting for more innocent victims. These cats have no way to defend themselves, and would probably not even know to run away -- living in a suburban or city setting, cats are accustomed to the presence of people. How could they possibly know that this person meant to harm them in some sort of cruel game?

This sort of malice is a threat to all living things. If this person is able, willing, wanting to inflict such pain onto a cat, what is stopping them from moving onto other animals? And as we know from extensive data, someone interested in hurting animals often progresses to harming -- and even murdering -- human beings.

Time is of the essence. Seven cats were shot in just one week -- this person cannot be left free to maim, torture, or kill for even one more day.

Sign the petition and show your support for Hillsborough County Animal Control, who must do everything in their power to stop this cat-killer!

Care2
Cats are being hunted and shot for fun in this Florida neighborhood!
SHARETWEET