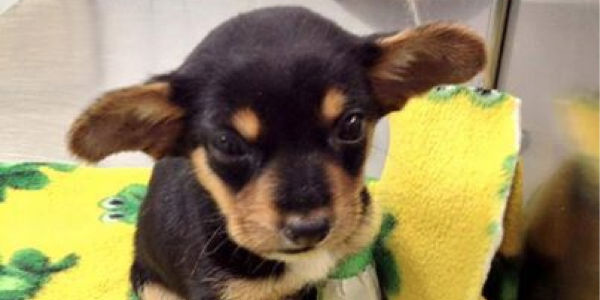 In Sarasota Florida a cruel Man decided to stop his little 8 week old Dachshund-Chihuahua mix Puppy Gizmo from yelping by pouring hot sauce all over Gizmo and down his throat! This cruel Man's Girlfriend took little Gizmo to the Fire Station for help, were he was completely limp in their arms. Sarasota Police Officer Jessica Sullivan said "she thought Gizmo was dying if he wasn't already dead", Gizmo was NOT breathing, his eyes weren't open, and he wasn't moving at all! I don't think they thought little Gizmo had a chance, they said "when they got him, his eyes were swollen shut, his sinuses were all inflamed, and his weak tiny Body was very malnourished, and he was also covered in fleas! The poor little thing! "it's going to be a long road of recovery for Gizmo". But just one day later this amazing little Puppy was showing how strong his little Body was, and just how much fight he has! You can "Like" my Page, "Stop Cruelty To Animals Wild & Domestic for updates on Gizmo.

Police said "Gizmo was tortured at the hands of his owner, 47-year-old Ephrian Myles, who is being held in the Sarasota County Jail on Felony Animal Cruelty Charges. Which brings us to why I started this Petition! We need to be the Voice for that sweet little Baby right now, we need to treat him as if he were someones Human Child! We need to make sure the cruel, horrible Man Ephrian Myles who did this, OMG! Hot Sauce is something I CAN"T even handle a taste of on my Finger Tip, I can't even think of what that Hot Sauce did to his little throat!

This is so terribly cruel, that poor little trusting soul did not deserve this!! As the Voices for Little Gizmo we need to make sure we scream and make sure this horrid Man gets the longest, and the stiffest Jail time as allowed by Law! We need to make sure that Gizmo gets justice for what he barely survived. So PLEASE sign and share this Petition and stand up for Gizmo, maybe his sad story will light the way to making the desperately needed changes in the Animal Abuse Laws. After Gizmo is rehabilitated, he will be going back to the Sarasota Animal Services and will be  placed in a foster home as part as his rehabilitation. Then Gizmo will be available for adoption. Please sign and share, share, and share this Petition again!

Thank You all very much,