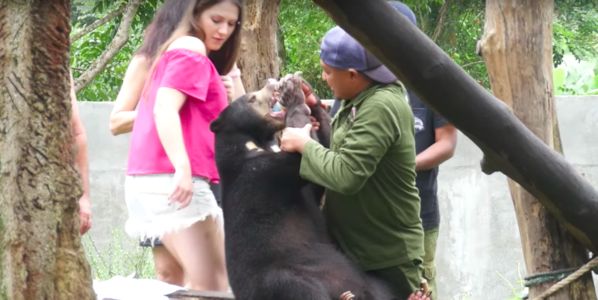 Indonesia and her islands are a paradise for tourists but a hellhole for animals.These animals have no voice in cruel Indonesia.

Wild animals are captured illegally and sold in wildlife markets throughout the country, alongside domesticated livestock. This illegal trade is also flourishing online. Many animals do not survive these markets and die in the filthy cramped cages where they are kept. They often have no access to food and water in the scorching Indonesian heat! These wildlife markets are also hot spots for disease, mutation and zonosis.

Animals, many of them endangered species, are kept in deplorable conditions in over 93% of Indonesia's zoos. There is no regulation to stop animals breeding nor laws to stop the cruelty and exploitation of animal performances in zoos and safari parks. These inhumane activities are carried out under the guise of "conservation".


As recent as July 2017, dogs were found brutally slain and sold to unsuspecting tourists as "chicken satay" in Bali, the island of the Gods.

Local Non Governmental Organizations (NGOs) get little help from government to enforce Indonesian Law No. 5/1990 that states: Every person who kill, capture, keep protected species (alive or dead) can be sentenced to five years in jail and fine of IDR100 million (US$7,400.00).

According to the United Nations Environment Programme (UNEP), illegal logging accounts for 73-88% of deforestation and loss of wildlife habitat in Indonesia. Illegal poaching and habitat loss has drastically reduced the numbers of Balinese starlings to the point of extinction.

Indonesia is home to approximately 17% of the world's wildlife and instead of protecting the animals and being the stewards of one of the world's top bio-diversity rich countries, the Indonesian Government's tepid action and corruption is condoning the daily torture, exploitation, poaching and rapid loss of wildlife habitats.

Take a pledge for the animals of Indonesia, be their voice and boycott travels to Indonesia until the government addresses this injustice.

Thanks as always and thank you Rebecca Rodriguez of One Animal World (OAW) for the use of her video footage.

We will continue to boycott tourism in your country until this injustice is addressed and corrected.

Thank you.
Sign Petition
SHAREShare this petition with friends!TWEETEMAILEMBED
Sign Petition
See more petitions:
You have JavaScript disabled. Without it, our site might not function properly.