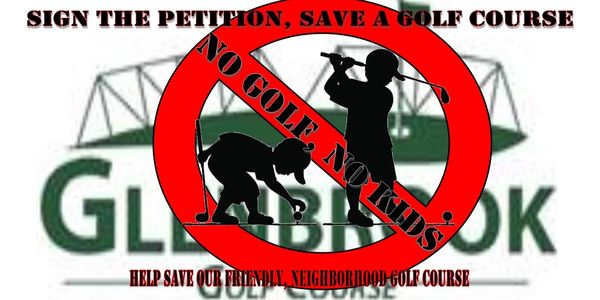 Our cause is to save Glenbrook Golf Course by lobbying to repeal this lease/ contract agreement and blocking the lessee (HBG) from acquiring the site.
Not only should Glenbrook be saved but also the rest of the Houston Municipal Golf Courses for future generations. The City of Houston is ill- suited to meet the challenges of today's golf business climate and the necessary improvements demanded by the public.
- City Hall has willfully ignored State statues and regulations in leasing this golf course site in this manner.
- Leased for the pitiful sum of $100 for 90 years.
- Taxpayers foot the bill for all irrigation water for 90 years.
- City Hall is obligated to use $3 million in Capital Improvement Funds* to create a highway entrance and a private multi- lane road to this site. This private road will pass through a nearby 8.73 acre city park, Charlton Park, thus reducing the size of the park. *per CM Gallegos (District I) at a Park Place Civic Club Meeting.
- With the well timed expansion of the TRZ 8 (Gulfgate) District, additional tax revenue is poised to benefit this elite group.
- By changing the land use with this lease agreement, it would deny the public's right of way, a transit way across the golf course that has been insured by deed covenants since 1924 and recognized by the City since 1941. For generations, the public used this transit way to go to and from school/ church.
- Lessee has the right to destroy the golf course and if they fail in their plans, they have no obligation to return the property as a golf course. This would open up this 132 acre track of land to speculators and developers. Maybe that answers the question, "Who is getting rich on this deal?"
- Lessee needs to raise $20 million by the end of 2017 but the lease/ contact agreement has no validity process or proof of funds raised. Contract allows only two City Department Directors to willingly accept bogus pledges without verification.
- Lessee, known as "Houston Botanical Garden", has never built or operated a botanical garden. On their own proposal's exhibit section, they failed to present not one conceptual drawings of the project. This unproven group went further with grandiose verbal promises to Council that paid attendance would exceed 150,000 annually but nothing in the form of a study, report or even history from another similar venue support these figures. There is no mention as to what species of plants or flowers will be planted at this site in the Sims Bayou Watershed and only a few miles upstream from the Houston Ship Channel and Galveston Bay? Are they invasive? In the contract, the lessee is responsible for clean up of these prolifically, harmful plants but only at the end of the contact (in 90 years). The contract does not require a remediation escrow account thus leaving City taxpayers liable. With all these red flags, City Hall chose to accept their proposal and theirs alone, no other proposals were requested.
- Community input was never sought by City Hall about the fate of this beautiful course. i.e. Town Hall Meeting similar to the Gus Wortham Golf Course meeting held months earlier. Gus Wortham (former Houston Country Club) was the first target of this well- connected elite group. Strong community opposition saved that historic course. City Hall was not going to make the same mistake again with Glenbrook Golf Course, by holding open meetings.
- Community informed weeks later of the details after the lease agreement was approved. i.e. Park Place Civic Club Meeting.
- To rebuild an equivalent golf course, the cost would be in excess of $35 million. Glenbrook Golf Course is already owned by Houstonians. Why should Houstonians entertain such a cost when we already own this beautiful historic golf course? The City should be encouraged to save the golf course by making a long-term term agreement with a proven, successful non- profit organization to fully operate the golf course. Only one hundred eighty-five miles west of Houston, such a non- profit organization operates San Antonio's eight golf courses, called the "Alamo City Golf Trail". To learn more about their success story, please go to: alamocitygolftrail.com
Sign Petition
SHAREShare this petition with friends!TWEETEMAILEMBED
Sign Petition
You have JavaScript disabled. Without it, our site might not function properly.