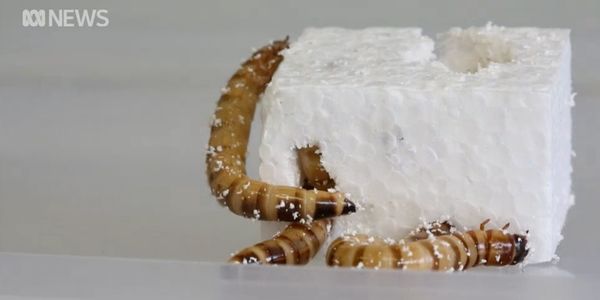 A Tiny, Mighty Superworm Could Solve Our Waste Crisis…by Gobbling Up Mountains of Trash!

We are slowly burying ourselves under trash of our own creation. It's a global crisis, but the United States is one of the most wasteful countries in the world – nearly 300 million tons of trash are thrown out annually. A huge portion of the responsibility for solving the waste crisis clearly lies with the U.S. – and a groundbreaking new study just suggested that our greatest ally in this fight might be a superworm.

Styrofoam is one of the worst villains of the trash crisis culprits. Because the material is really dense, it tends to take up a lot of space, and it is extremely difficult to recycle. Research suggests polystyrene (commonly called Styrofoam) can take as many as 500 years to break down and decompose – time we do not have to solve the waste crisis. Lucky for us, beetle larvae called zophobas morio can actually survive on polystyrene alone! That's right – if we play our cards right, this little superworm could be our ultimate sidekick in solving our waste problem, gobbling up the trash that we would otherwise be stuck with for centuries.

Since the 1950s, waste in the United States has sky-rocketed, in part because companies have intentionally shifted towards single-use packaging and containers to increase the number of products consumers have to buy. Styrofoam cups for the cookout, single-use water bottles for kids' sports games, or plastic utensils for easier cleanup might seem convenient. But all of that plastic has to end up somewhere – likely one of the 2,000 landfills that are currently active in the United States, many of which have nearly reached their capacity and are near overflowing. Worse yet is that over 14 million tons of plastic don't even make it to landfills at all, instead ending up in waterways and oceans, killing animals and destroying vital underwater habitats in the process.

Not only are we running out of room in landfills, but waste also creates greenhouse gas emissions which contribute to catastrophic climate change, warming our planet even further. Landfills make air quality worse, smell bad, and cause a whole slew of environmental problems – both local and global.

The EPA must team up with this little hero, and fund investigations into the role it could play in waste management and disposal. Getting our waste crisis under control will help curb the climate crisis, improve human and wildlife health, and clear our beautiful Earth of the trash mountains that plague it! Sign the petition now to tell the EPA: we must research this superworm and curb the waste crisis now!
Sign Petition
SHAREShare With FriendsTWEETEMAILEMBED
Sign Petition
See more petitions:
You have JavaScript disabled. Without it, our site might not function properly.

Care2
A Tiny, Mighty Superworm Could Solve Our Waste Crisis…by Gobbling Up Mountains of Trash!
SHARETWEET