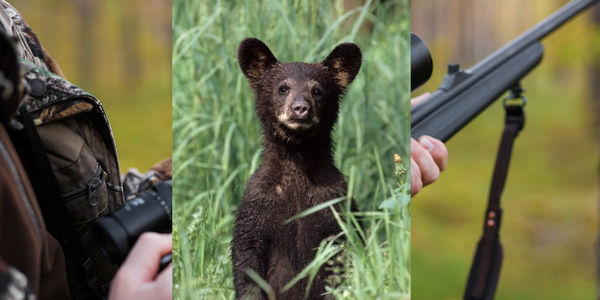 The mission of the Maryland Department of Natural Resources is to preserve, protect, enhance, and restore Maryland's natural resources. Wild animals, including black bears, are a precious natural resource. Sadly, a trophy hunt is scheduled for October 23 to 26 in Garrett, Frederick, Washington, and Allegany Counties. In last year's hunt 167 bears were killed: 21 of these were cubs.


More than 245,000 petitioners have stated their opposition to this cruel hunt. It can take as many as six shots at point blank range to kill a large adult bear. With one shot, or one arrow, bears will suffer in agony for some time, especially those that are never found by the hunters. Innocent animals will experience great suffering and cruel deaths.

In 2004, after 51 years of black bear protection (in 1953, there were only 12 bears left in the entire state), a bear hunt began again when Gov. Ehrlich overruled the Maryland General Assembly that voted against the hunt. There was no justification for this slaughter to resume in 2004 and none now.

It took decades of hard work by many different people and agencies to stabilize the black bear population in North America. Bears have an important role in our ecosystems in distributing fruit seeds throughout their ranges, which can be up to 80 square miles for a male; they eat huge numbers of insects and moth larvae, helping to control these populations. The bears are neither destructive nor dangerous; their appearance in places they are not usually seen is doubtless a result of human-made climate change altering natural ecosystems, which changes the way animals live, migrate, eat and grow.

Since the resumption of the hunt, a total of 925 bears have been killed; 103 were cubs. This hunt is an atrocity at any time, but it is also biologically reckless at a time when extinction is the gravest conservation problem of our era; at least one fourth of the world's mammals now face extinction. In promoting the hunt, the MDNR website has stated: "For a hunter to take a wild black bear is a true achievement." These "achievements" are arrived at with the help of a variety of high-powered weapons, including rifles, shotguns, handguns, muzzleloaders, vertical bows, crossbows, and air guns. The bears' majestic size betrays them - the mother bears try to protect their young as the bloody massacre begins.

There is no escape. Dogs are allowed to track the wounded animals. The dead bears ("trophies") are tagged. Carcasses of tagged bears are a sad testimony to the state of a Department of Natural Resources that betrays wild bears when its duty is to preserve and protect them. Preserve, protect, enhance and restore Maryland's natural resources. Period.

Thank you for signing and sharing the petition. In addition - feel free to send your own, polite correspondence to the Secretary: