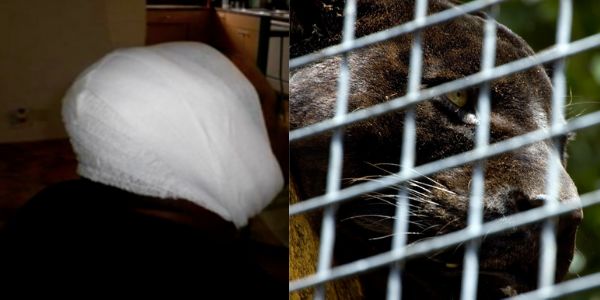 Close down this backyard exotic animal zoo where a man was mauled by a leopard!

Backyard and roadside zoos are always sites of tremendous suffering for the animals who live there. They never have enough space, proper veterinary care, or socialization. One such backyard "zoo" in Florida just made the news after a man paid $150 for a 'full contact' experience with a black leopard wherein the wild animal mauled him and ripped off his entire scalp. This person should never have been allowed to interact with a black leopard in the first place!

Sign the petition to demand that Poggi's Animal House is shut down immediately and all the animals are transferred to reputable sanctuaries!

Pretty much as soon as the man entered the leopard's enclosure with the plan of petting its belly, the leopard attacked him, biting his head and ear. Ultimately his scalp and ear were almost entirely detached during the attack. The man has had to have two surgeries so far. And sure, he should not have signed up to do this, but how could he have known the situation was dangerous when someone parading as an expert told him it was safe?

We also can't blame the leopard, who had no choice here. It was locked up in a tiny cage without any of the natural things leopards have access to in the wild. Most animals put into captivity without proper care eventually become aggressive.

So the blame is really on the person operating the whole "rescue," Michael Poggi. Clearly he is just trying to make money off of exotic animals and doesn't know how to properly care for them. If he did, this would never have happened! Florida has issued some citations, but still not shut the place down for their illegal activity.

Sign on the demand this abusive backyard "zoo" is closed forever and the poor animals get to live out their lives peacefully in an actual sanctuary.

Care2
Close down this backyard exotic animal zoo where a man was mauled by a leopard!
SHARETWEET