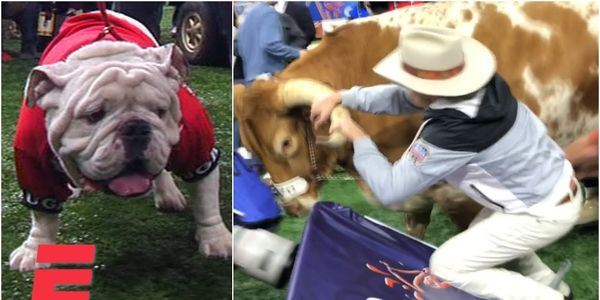 Having a favorite university sports team is as American as apple pie. The thrill of watching your alma mater kick butt is like nothing else. The rivalry, the screaming crowds, the cheerleaders, bright lights and styrofoam hands, all are key ingredients to having a great game night. But what isn't necessary is a live animal mascot.

Nothing proves that better than the story of Bevo and Uga. Bevo is the University of Texas's (UT) real-life longhorn steer; an enormous beast with horns that span several feet wide. Uga, on the other hand, is the "cute but tenacious bulldog" mascot for the University of Georgia ( UGA).

On New Year's day, the two football teams were set to go head to head at the Sugar Bowl held this year in New Orleans. As a poorly thought out gimmick, organizers thought it would be a good idea two have the two animals "meet" before the game. So, in the middle of a stadium filled to the brim with howling fans, blinding lights and a buzz with action on the field, the schools' mascot handlers brought Uga face to face with Bevo. Things, needless to say, did not go as planned. Even before the animals had been properly "introduced" the mascot summit was over. While Uga was waiting patiently on the sidelines with his handler, Bevo tried to break free and rush the pint-sized bulldog. With his head down and horns ready for action, Bevo came storming toward Uga sending people running for cover.

Luckily both Bevo and Uga are fine. But it could have been far worse. When universities allow their sports teams to use live animal mascots they are not only putting the animals in danger, but they could also endanger their students. What's more, forcing an animal to participate in the chaos of a college sporting event is cruel. Animals are not props, they are living, breathing beings. While other teams have moved on from using live animals as mascots, others like UGA, UT, Louisiana State University, among others, have not. These schools are subjecting the animals they claim to love to unnecessary stress and unnatural situations.

There is a better alternative. Like professional sports teams, universities could hire men and women to wear a costume mascot rather than tormenting live animals.

Please ask the National Collegiate Athletic Association (NCAA) to show their support for animal rights. Sign the petition and demand they tell their members to ban the use of live animal mascots.
Sign Petition
SHAREShare this petition with friends!TWEETEMAILEMBED
Sign Petition
See more petitions:
You have JavaScript disabled. Without it, our site might not function properly.