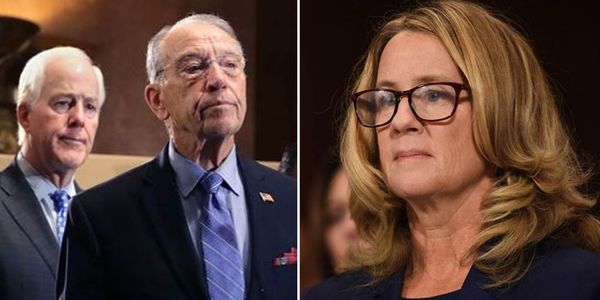 If it wasn't already clear that Republicans refuse to take seriously any allegations of sexual assault from women, their collective treatment of Brett Kavanaugh's first accuser, Dr. Christine Blasey Ford, is proof.

Whereas the ranking Democrat on the Senate Judiciary Committee, Sen. Dianne Feinstein, expressed her desire that Dr. Ford's allegation is "treated with the seriousness it deserves," she was not afforded the same respect by those on the other side of the aisle. Republican Senators responded with derision, questioning the veracity of her claims and trying to railroad her testimony.

Senator Lindsey Graham (R-SC) said, "If the committee is to hear from Ms. Ford [sic], it should be done immediately so the process can continue as scheduled." Judiciary Committee Chairman Senator Chuck Grassley (R-IA) said Ford's public allegation "raises a lot of questions about Democrats' tactics and motives." Senator Orrin Hatch (R-UT) called the allegations "another tool in [Senate Democrats'] attempts to delay and disrupt Kavanaugh's confirmation, another ring in the circus of their creation."

Dr. Ford has subjected herself to character assassination and death threats. She has had to move out of her house and hire private security. She has nothing to gain by subjecting herself to this process other than to hold a man accountable for his disgusting actions that have impacted her life so greatly.

For Senate Republicans to stoop to the level of the lowest common denominator in this country, to act without a modicum of honor or integrity, and to dissuade other women from coming forward is an egregious betrayal of their duty to serve the citizens of this country.

Dr. Ford deserves a fair hearing. She deserves the benefit of the doubt. And she deserves at least a shred of respect from the partisan hacks enjoying their last fleeting moments in the majority of the United States Senate.

We, the undersigned, demand that Senate Republicans change their behavior immediately and afford Dr. Ford the same treatment that is being afforded to the man accused of sexually assaulting her.