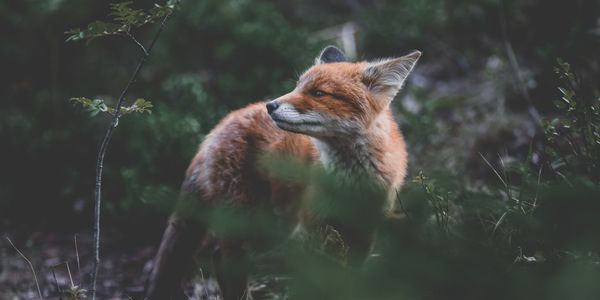 Closed-circuit television footage from a family-owned farm just outside of London recently captured the traumatic hunt and subsequent gruesome murder of a terrified, innocent fox. Hunting foxes with hounds is illegal in the United Kingdom, but that did nothing to save this one's life.

The Hunting Act of 2004 made these fox hunts illegal, but also has loopholes that hunters use all the time to get away with them. Parliament should take this opportunity to close these deadly legal gaps.

Sign the petition demanding that every single member of this hunting group be charged with animal cruelty, and that Parliament strengthen the hunting laws already in place!

In the released footage, you can see the terrified fox dart out in front of a man mounted on a horse and cross onto the private farm. The man sees the fox and turns his horse to slowly follow as hounds dart around him, and he waves to another hunter off screen indicating that they should follow. This was a suspicious move, given that later the group, called the Kimblewick Hunt, gave a  statement claiming that the murder of the fox was an accident, and that their group had been "drag hunting," or following an artificial scent to simply go through the motions of the hunt -- the sport that the Hunting Act of 2004 allows.

Seeing the fox, following it, not calling off the hounds, and telling other hunters to follow so they can see the bloodbath? Those are no accidents.

The frame changes, and you can see the hounds in hot pursuit of the exhausted, scared fox. No hunters are in sight, even though they could easily keep up on horseback if they wanted to stop the chase. They were letting the hounds do their illegal, nefarious work. The fox tries desperately to seek refuge behind a dumpster, but by the next frame it's clear that it lost the fight for it's life. At least 20 dogs are huddled with their heads together, ripping the fox limb from limb. Hunters excitedly run towards them, shouting at each other and bouncing up and down as they sprint. One hunter is seen callously ripping the fox up into the air, away from the dogs he trained to do this.

This footage was not the only indicator that something horrible had happened on Roger and Linda Kemp's farm -- the fox's internal organs were scattered on the property, telling a heartbreaking story of how the hounds were egged on and unchecked when they ripped apart the poor animal. The devastated couple were forced to clean up the the murder scene themselves.

This is certainly not the first time that a fox has crossed into the artificial scent of a drag hunt and been punished for it by death. In fact, this isn't even the first time some of these hunters have tried to turn a drag hunt into an illegal fox hunt! Two of the members present at the murder were caught in 2019 forcing a fox into the path of a drag hunt, using painful rods and holding it by its tail to violently remove it from a trap so that their dogs could get to it. They were charged with animal cruelty, but only had to serve community service and pay a small fine.

Obviously, they have not learned their lesson. They and their fellow Kimblewick Hunt members need to be charged with animal cruelty and punished proportionately. Then, Parliament must strengthen the Hunting Act of 2004 by making drag hunting and animal flushing with hounds illegal! Sign the petition today.