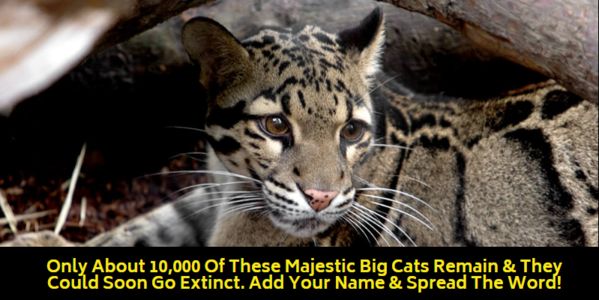 Save Rare Clouded Leopards From Extinction!

Only about 10,000 of these majestic big cats remain, and they could soon be gone forever.

Will you help them, before it's too late? Add your name if you want to enact powerful anti-poaching efforts to protect them from heartless criminals!

Clouded leopards are being massacred for quack medicine, habitat destruction, and the fashion industry.

In 2018, "a publicly reported transaction involved the sale of 1.23 tonnes of leopard bone, representing approximately 150 leopards," reported EIA International, which even received an offer, via an undercover reporter, to purchase a fresh leopard skin complete with the flesh.

Let that sink in... Over a ton of bones, representing 150 precious lives that left behind beloved mates or children.

"The clouded leopard and its prey are targeted by both commercial and subsistence hunters. Because larger wild cat species such as tigers and leopards have mostly been hunted out of their range, clouded leopards are increasingly becoming the targets of commercial poachers seeking their skins, bones, and meat.

"In one Myanmar market monitored by the conservation group Wildlife Alliance, the number of clouded leopard pelts has increased by 200% in just two years.

"Many of these products end up being purchased by consumers seeking traditional medicines and exotic fashions in the booming economy of China. Live clouded leopards are also sought by wildlife traders, destined to become pets or join the exotic zoos of wealthy collectors," said CloudedLeopard.org.

But it gets worse...

Because these precious animals are facing threats on multiple fronts.

"Their forest habitat is experiencing rampant degradation due to industrial logging and the development of agricultural areas, including vast palm oil plantations in Malaysia and Indonesia.

"These degraded areas cannot support prey species nor provide habitat for clouded leopards," according to CloudedLeopard.org.

They went on to say: "Even protected forest areas suffer. Rare woods such as ironwood or aloe are collected illegally and their products and oils are sold to international markets.

"Furthermore, wood collectors live off the land as they work, hunting for meat and displacing wildlife. This trade is so lucrative that these wood poachers often employ armed guards to accompany them."

As things stand, there are only about 10,000 of wild clouded leopards left in the world, and no breeding population exceeds 1000 individuals, according to the World Wildlife Fund.

How long do you think these creatures can last, before they vanish from the Earth?

The challenges are many, and the road ahead is difficult.

But we must not give up.

Your signature could make a real difference in saving this beautiful species from extinction.

The way forward is to emulate successful anti-poaching efforts elsewhere in the world.

For example, rhino poaching is down by 90% in South Africa's Kruger National Park, thanks to the efforts of military veteran Damien Mander and his comrades.

They recruited teams of anti-poaching guards who patrol around the national park, stopping poachers and other criminals who want to pillage the preserve.

By adopting this successful model in Asian nations where clouded leopards live, we can stop all of the threats that are leading them to disappear: we can stop the illegal logging, and we can stop the poaching of both the leopards and their prey animals.

But this is going to take international organization, and sizable funding.

That's why we're calling on the Asian Parliamentary Assembly to get the job done.

Don't you want to save the clouded leopard from extinction?

Then add your name to ask the Asian Parliamentary Assembly Committee on Environment to spearhead a movement across the continent to enact powerful anti-poaching efforts to save the clouded leopard, before it's too late!