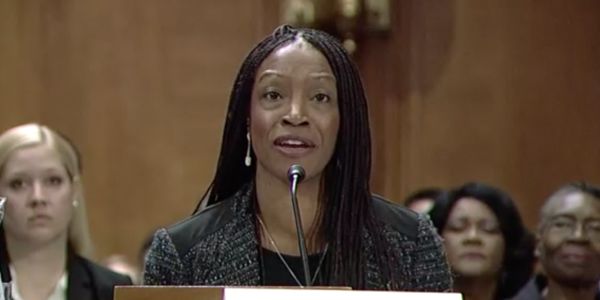 This Woman Has Worked All Her Life to Destroy Wildlife Protections, So Why Has Trump Nominated Her to Be the Next Director of the Fish and Wildlife Service

Assuredly, friends and colleagues must have nice things to say about Aurelia Skipwith but one thing they can't say is that she is an advocate of conservation and the environment. That's why it's so eyebrow-raising that Trump has nominated her to lead the U.S. Department of Fish and Wildlife (FWS).

A quick look at her background and you can easily see that she has serious conflicting interests of that of FWS. Firstly, in her current position at the Department of the Interior, she has personally worked to loosen the Endangered Species Act, the Clean Water Act and the Clean Air Act. These laws have not only ensured the survival of some of America's most iconic species but they have stopped companies from polluting our water and air, saving thousands of lives over the decades.

But the issue with her nomination doesn't end there. For five years her fiance, Leo Giacometto, worked on behalf of Westlands Water District, an organization that has consistently clashed with California to weaken environmental protections that clashed with the needs of local farmers.

Also troubling is her history as an executive for Monsanto. The agrochemical giant produces chemicals that are linked to cancer and also the disappearance of bees. At Monsanto, Skipwith lobbied the Department of the Interior (DOI) - her current employer - targeting the ESA. And as Deputy Assistant Secretary of Fish, Wildlife, and Parks she led the way to rescind the ban that would keep Monsanto's bee-killing chemicals out of national refuges.

So troubling was her nomination that when it was announced, nearly 30 former FWS employees came forward denouncing her appointment pointing to her myriad conflicts.

Clearly, she has no intention of protecting the environment and America's wildlife as the department she would lead is mandated to do. Instead, it is more likely that she will use her connections and influence to slowly tear down the regulations that have helped save species from extinction and protect the quality of our water and air.

A Senate committee already approved her nomination 11 -10 down party lines, now her nomination will go to the full Senate for confirmation. That means we still have time to tell our senators that Skipwith is the wrong choice to lead the FWS.

Stand up against the destruction of our natural heritage. Sign the petition and tell the Senate to vote NO on Skipwith's nomination. #skipskipwith
Sign Petition
SHAREShare this petition with friends!TWEETEMAILEMBED
Sign Petition
See more petitions:
You have JavaScript disabled. Without it, our site might not function properly.

Care2
This Woman Has Worked All Her Life to Destroy Wildlife Protections, So Why Has Trump Nominated Her to Be the Next Director of the Fish and Wildlife Service
SHARETWEET