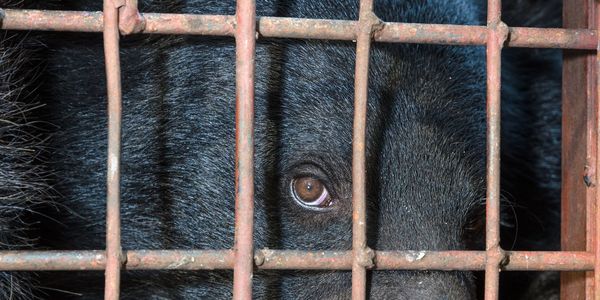 In a major victory for bears and the animal rights organizers hoping to protect them, South Korea recently announced that it would phase out the horrific practice of farming bears for the purpose of extracting their bile! In a wave of similar bear bile bans across Asia, many countries are realizing that the horrors of bear bile extraction far outweigh any perceived "benefits" of the outdated practice.

Sign now to demand that the Chinese government follow suit and ban the practice of farming and imprisoning bears for bile extraction!

A 2016 survey showed that overwhelmingly, Chinese people oppose the bear bile industry – to be exact, 97% said they believe it is extremely cruel.

And they're right. It should come as no surprise that an industry that promotes the consumption of an animal's digestive fluid has a history of abuse and mistreatment. Confining bears to small cages, the animals are then forced to endure one of many different -- and equally horrific – extraction techniques. On some farms, bears are hooked up to catheters and "milked" for their bile. On others, farmers put holes in a bear's gall bladder -- which is as painful as you imagine it may be -- which is continuously reopened throughout the bear's life to extract the bile it stores. Yet other farms use a four-inch needle for extraction. It is hard to say which technique is more vile than the next, but one thing is clear: all put the bears through needless, cruel, and unusual suffering.

Despite key victories in South Korea and Vietnam, the bear bile industry is still perfectly legal in China. While bear bile does have medicinal properties, research shows that all of its benefits have been discovered in other herbal alternatives which do not require rampant animal abuse. There are many ways to preserve herbal medicine and cultural traditions that do not require such invasive violence against innocent bears.

China must follow the trend of the international community, listen to its own public, and declare a commitment to animal rights and bear health by banning the bear bile industry within its borders. Sign the petition now if you agree!