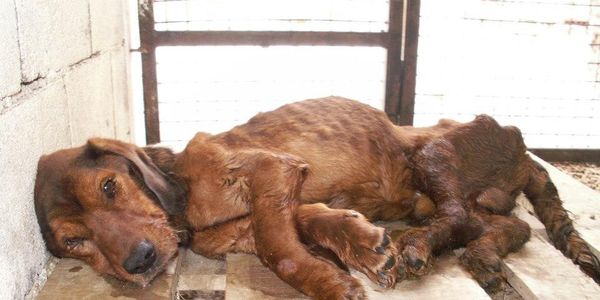 Bad news. The Legal – Constitutional Committee of the House of Representatives in Bosnia Herzegovina has refused to adopt any amendments that would mitigate the amendments the SDP party has advocated:  amendments that will result in mass killing of strays.Two votes were for these mitigating amendments, three against and there were two abstentions. We do not know who abstained.The next step is a second reading on the 20th of November and then voting in the following B&H Parliament session – probably 15 days after the second reading, we don’t know.Bosnia-Herzegovina is one step closer to what is happening in Romania.

In November, 2012 Reliable reports and eyewitness accounts substantiated by photographs showed that over 50 dogs were kept in inhumane conditions in the Hresa Dog Shelter, on the outskirts of Sarajevo. They were completely without adequate food or water or veterinary treatment. Numerous dogs were kept in tiny cages, one dog in a cage no larger than itself. Dead dogs were left amongst living dogs.

Witnesses said that any non-purebred dog caught by the shelter was killed, and that purebred dogs were stolen from owners and only released to the owner if a ransom is paid.

With heavy snowfall and temperatures hitting -30 and no heating in the shelter, without immediate help many of these dogs were freezing to death.

Activists returned after an initial investigation and found that 40 dogs were missing. Workers at the shelter said they had been killed and buried in a garbage dump. The activists managed to release and rescue a mother dog and her seven puppies and one other adult dog. They then had to leave the premises as they feared for their lives. They returned to Hresa on the 7th of November. They found a completely deserted shelter. The dogs they’d seen there previously were no longer. However there was a large, locked container nearby. Without police protection it was not advisable for the activists to investigate further.

The shelter closed before the State Veterinary Office could make an investigation.

The shelter re-opened this year.

Animal activists visited the night before last, and there were many dogs. Yesterday only some were left. "There was a smell of death," they said. They searched for bodies but couldn't find anything.

There are no mongrels in the shelter. The activists received information that mix breeds are killed and only purebred dogs are kept. No change since last year!

September 2013: 'Business as usual' in the shelter!

More Information:
IN MEMORY OF VUCKO

Horror Shelter in Hresa Part One

We, the undersigned, request that the Government of Bosnian and Herzegovina, the Istocni Stari Grad authorities and municipality mayor Bojo Gašanovic in particular, investigate the matter of the Hreša dog shelter.

We have reliable reports and eyewitness accounts substantiated by photographs from November 1st that over 50 dogs were being kept in inhumane conditions, without adequate food or water or veterinary treatment, that numerous dogs were kept in tiny cages, that dead dogs were left amongst living dogs, that dogs had open, untended wounds. Furthermore, there were reports that any non-purebred dog caught by the shelter was killed, and that purebred dogs were stolen from owners and only released to the owner if a ransom was paid.

On November 3rd, a second visit to the shelter was paid by animal welfare activists as they had found homes for 10 dogs. But 90% of the dogs in the shelter had disappeared. Workers from the shelter stated that dogs had been killed on November 2nd  and buried in a garbage dump. Photographs taken by activists on November 3rd show the shelter as almost entirely empty. Activists left as they feared for their lives, but managed to rescue two adult dogs and five puppies.

We demand that a full investigation is undertaken, that any illegal actions be dealt with to the full extent of the law. We will not cease our enquiries until answers are provided. All international animal welfare organisations either have been or will be contacted about this atrocity.

We further demand that the municipality ensures that the facility is immediately provided with proper management and funds to care for any remaining dogs. Modern practices must be implemented, giving food and fresh water and the facility be must kept sanitary and properly staffed with veterinary professionals so the animals are cared for and, ultimately, caring homes need to be found for the dogs.

This situation has sparked a global outcry and we look to the Bosnian and Herzegovinan justice system and authorities to conform with EU standards regarding animal welfare, and to apply the law that was passed in Bosnia Herzegovina incorporating these EU standards.

Thank you for taking the time to read this letter