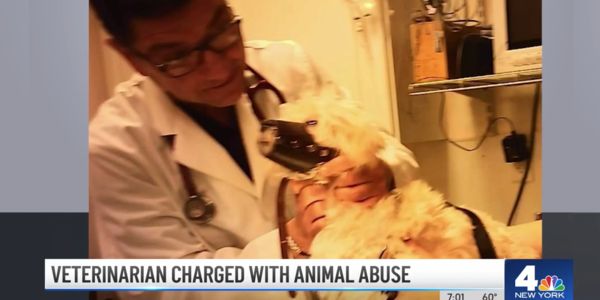 He Punched and Kicked Animals, But He Is Still a Practicing Veterinarian.

Disturbing, shocking, horrific - those are just a few of the adjectives journalists have used to describe recent leaked photos depicting animal abuse. Yet most terrifying of all? The alleged perpetrator is still a practicing veterinarian in the state of New York.

Sign now to demand the New York State Department of Education to rescind this vet's license and ban him from ever practicing in the state again!

Animal abuse is devastating in each and every instance - yet there is something especially scary about a vet perpetrating abuse. As medical professionals who are paid to interact with and care for animals, pet parents trust them to care for our beloved fur babies. All veterinarians take an oath, swearing to use their knowledge to protect and safeguard animals, and to reduce their harm and suffering. This oath charges vets to promote animal health and welfare. But this man was quite literally doing the opposite.

Staff were so alarmed by what they saw at this veterinarian's clinic, they themselves contacted police to report him. The leaked photos depict the vet in question aggressively hitting animals, kicking them, and punching some of them brutally in the ribs. In one photo, the man is shown choking an innocent, poor dog. Investigators suspect that there were potentially many more instances of violent abuse that just weren't caught on camera, especially given that this person was working with animals day in and day out as a career. That meant he had ample access to helpless creatures!

So far, authorities have charged the man with six counts of cruelty against animals, as well as assault and forgery. But if officials allow him to remain a medical professional, he still has the means to do untold damage to additional companion animals. The New York State Department of Education could change that, since the agency is in charge of veterinary licensure in the state of New York. There is a simple way to protect future animals from this horrid abuse and suffering: rescind the alleged abuser's licensure and ban him from ever practicing in the state of New York again.

Sign the petition now to tell regulators: we will not tolerate animal abuse! Rescind this man's license now and ban him from ever practicing in the state in the future!
Sign Petition
SHAREShare With FriendsTWEETEMAILEMBED
Sign Petition
See more petitions:
You have JavaScript disabled. Without it, our site might not function properly.

Care2
He Punched and Kicked Animals, But He Is Still a Practicing Veterinarian.
SHARETWEET