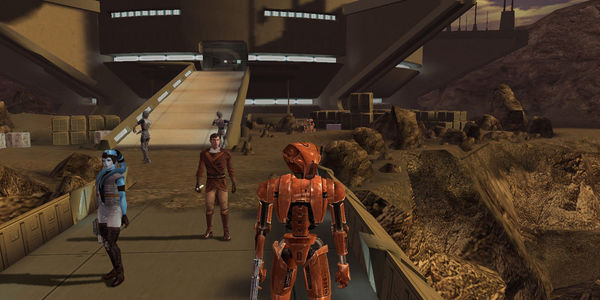 For the longest time, there were no more Star Wars movies once Return of the Jedi concluded in 1983. With this in mind, the former owner of the Star Wars property, George Lucas, gave his blessing for various authors to continue writing stories set in the Star Wars universe, to a variety of novels, short stories, comic books, video games, and so on and so forth. These were eventually collectively dubbed the Star Wars "Expanded Universe," or the Star Wars EU, which proved to be a thriving and rich universe full of possibilities seen past the limitations of the three (and eventually six) movies as well as the visual format they were confined to. For many Star Wars fans, this wasn't just material to grab their attention until the next movie came along, given the seat-of-the-pants approach Lucas had in crafting his films so that it was always in doubt whether he would make a new one, this WAS Star Wars. The beginning, the middle, and the end. This was the official universe, the official stories that detailed the continuing adventures of Han, Luke, and Leia and others before and after A New Hope and Return of the Jedi.

Despite claims to the contrary, there was an innate orderliness to the structure of the Star Wars EU. The G Level of canon, which adhered to the six films made by Lucas. The T Level of canon, such as for a TV series like the Star Wars: The Clone Wars cartoon. C Canon, short for continuity canon, which included a variety of novels, video games, comic books, and so on (for example, the Knights of the Old Republic games would be C Canon). S Canon, for secondary canon materials that are used as such by and ignored or needed by authors (for example, Jedi Prince was universally ignored by authors publishing stories in the time period set after Endor). D Canon, short for material from Star Wars Detours, and then N Canon for that which is non-canon (such as certain alternate paths explored in the popular Knights of the Old Republic games).

In 2014, to coincide with the new Star Wars movies being released from 2015 onward following the Disney acquisition of Lucasfilm in 2012, the company announced that all materials made prior to 2014, with the exception of the six films and the Star Wars: The Clone Wars cartoon, was "non-canon" and had "always" been "non-canon" or N Canon. This is hardly true, since there were tiers to the old levels of canon within the former Star Wars EU, rebranded as Legends, and to say such revealed a startlingly sparse lack of knowledge regarding the property Lucasfilm was put in charge of.

That said, the new canon of Star Wars is, in effect, its own continuity, and so it is inevitable that it has drawn in a large number of new fans and supporters, even older Legends fans, who cherish it to the same degree as the older fans had for the Legends EU. This is perfectly understandable, and it is not the point of this petition to debate which one is superior over the other. Merely that the former EU need not be shoved to the side into an N Canon status that it never belonged to and forgotten for people to enjoy the new material. To do so reveals a complete disregard for the fans to simply retell the story because reboots are the go-to for Hollywood these days. Already this has caused huge fandom division that could otherwise have been avoided with that initial 2014 decision if it had been handled with the same care that went toward organizing the tiers of canon under Lucas.

Thus, it is the purpose of this petition to get the old levels of canon reinstated, but to adopt a similar canon tiering for the new material that it could greatly benefit from. To this end, what we in this petition will recommend is that the Legends EU be christened "L" Canon, short for either Legends or Lucas Canon. The G (short for George Lucas) Canon will still be the dominant, primary canon, comprising the six movies from 1977 to 2005, with T canon following after that (so that Clone Wars could still exist as part of this canon or the Disney canon) then S Canon, then D Canon, and then N Canon, and so on.

And then the Disney canon, christened as "M" Canon given the iconic image of Mickey Mouse that is representative to Disney, would have its own tiers of canon, starting with "K" Canon, named so in honor of the current one in charge of Lucasfilm, Kathleen Kennedy, which includes the six movies, and any additional movies past then (which would include the sequels and their companion standalones), and then there would be T Canon (so that again, the Clone Wars cartoon could fit here, but also Rebels and The Mandalorian), then C Canon and S Canon, then N Canon for non-canon material, and so on and so forth, to be reordered as time passes and the need for new tiers arises with the new books and material released under this hypothetical M Canon.

It is felt that such tiers for canon will eventually be required, given the rapid pace that novels, comic books, short stories, and so on are being released. And this petition would merely be the starting point, not the end in and of itself, to how the structure of canon is organized under the Disney brand and those who control Lucasfilm now. And it is certainly not the intent of we who have signed this petition to single out or otherwise discriminate against fans of one series over another. Those who enjoy the new material are not bad people or bad fans, except perhaps those who take their legitimate criticism too far, as there is certain to be new stories that are superior to or inferior to Legends content in the eyes of the beholder. It is the intent to merely return the entirety of Legends to the story of Star Wars, given that there is no good reason Legends cannot exist in the same universe as Star Wars for new stories to be told, or to remain in that state that it is, but as an equal universe alongside the hypothetical M Canon.

Failing that, it is then the purpose of this petition to urge Lucasfilm to put Legends content into Creative Commons so that other people may freely tell their favorite stories without fear of reprisal, most chiefly among fan communities, who require financial restitution in order to be able to pursue their favorite fan projects. To carry out either of these requests would, in the opinion of the signers to this petition, decrease fan division that is growing out of control with each new Star Wars installment, and each new tease that some character or planet has been recanonized, only for most of Legends to remain in the N Canon limbo it is now, since it is only makes Legends fans who were unfairly singled out in 2014 hunger for more.

It is the hope of the signers to this petition that Lucasfilm and Kathleen Kennedy in particular will take this petition seriously, and recanonize Legends under whatever type of tiering system fits this situation. We are not making demands. We are simply asking that you take these steps to resolve the escalating fandom division, since it is entirely unnecessary for there to be a fandom civil war over Legends versus the Disney brand for people to check out Star Wars, and to pursue the wild scale of adventures in that universe.