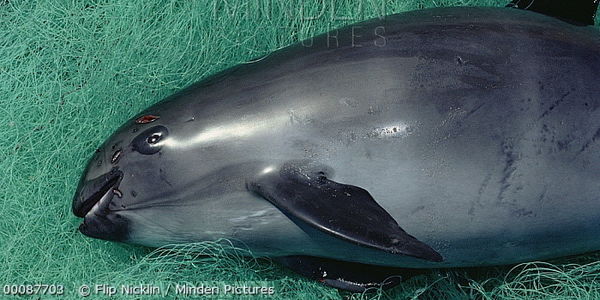 The last 10 vaquita porpoises could die, if the government of Mexico doesn't act fast

Vaquitas are the rarest marine mammals on Earth, known for making loud pig snorting sounds and also for being the smallest porpoises in existence. Cousins of the dolphin, only 10 are left alive in the whole world.

One of the main reasons for their impending extinction is drowning to death in gillnets — a type of fishing gear that's been used illegally in the Sea of Cortez near Mexico. These last 10 critically endangered animals could be saved. But the government of Mexico just made that much harder, by loosening enforcement for regulations designed to save the vaquitas' lives.

Sign the petition to demand the government of Mexico reverse course and protect the vaquita! They must fully enforce prohibitions on illegal boats and gillnets!

The Sea of Cortez (also known as the Gulf of California) is known as a "zero tolerance area" where fishing is strictly banned. This has been extremely important for the preservation of this rare species. But rather than upping its game and cracking down even more seriously on criminal infractions, Mexican authorities chose to simply throw their hands in the air.

While fishing is still technically illegal in the sea, that won't count for much any longer. Now, officials are saying they will supposedly use some level of monitoring, surveillance, and deterrence to prevent fishing — but only if there are enough illegal activities occurring. The new plan states that if authorities only witness fewer than 20 boats in the sea, then they will commit no more than 60% of their policing capacity. Even if as many as 50 illegal boats are seen in this protected area, the government will only utilize 80% of resources for enforcement.

As Alejandro Olivera, a senior scientist at the Center for Biological Diversity, says, this new policy essentially means that authorities "won't even bother fully enforcing the fishing ban until 50 illegal boats are detected in this small area."

For every single illegal boat allowed out in the Sea of Cortez, another rare and precious vaquita porpoise is put in danger. There are only 10 of these animals left. We cannot afford to lose a single member of this vulnerable species.

Tell the government of Mexico that it must commit its full resources to protecting and rebuilding the vaquita species! Sign the petition now!
Sign Petition
SHAREShare this petition with friends!TWEETEMAILEMBED
Sign Petition
See more petitions:
You have JavaScript disabled. Without it, our site might not function properly.

Care2
The last 10 vaquita porpoises could die, if the government of Mexico doesn't act fast
SHARETWEET