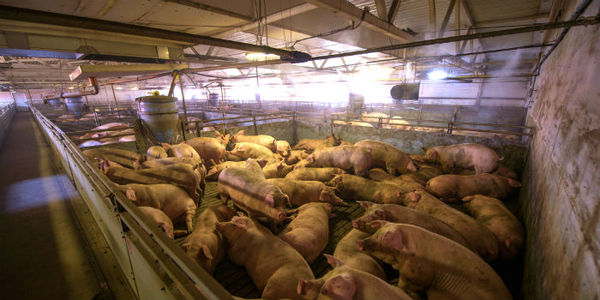 Air and water pollution from waste generated by North Carolina's huge factory hog farms has been plaguing some NC counties and their residents for years. Now state legislators are attempting to block lawsuits from protecting what is mostly a minority population.

The Charlotte Observer reported in 2015 that there were over 20 nuisances lawsuits before the federal courts from residents complaining of the stench they live with every day - on top of swarming flies everywhere and dead pigs spilling out of roadside boxes.

The stench is not just a nuisance. Public health reports show the hydrogen sulfide and ammonia released from the operations interfere with breathing and cause burning eyes, high blood pressure, headaches and even anxiety. Most of those affected are too poor to move away.

According to a recent report by Mother Jones, the state legislature is now "working to stick it to the very people who live under these conditions" by severely limiting the amount of money awarded in nuisance lawsuits or even barring them from suing hog growers at all.

In 1996 reporters at the Raleigh News & Observer won a Pulitzer for their series on how "loose ethical standards" in the state legislature protected the hog industry "from rational regulation that benefits the public at large."

Since then it appears little has changed. Sign this petition to insist the NC Legislature stop sticking it to the minorities living with hog farm stench.

To Members of the NC General Assembly:

According to Mother Jones, the bills sponsored by members of this body seek to protect one company in particular, Murphy Brown, a subsidiary of Smithfield, which is now owned by a Chinese firm, WH Holdings. MJ found that one of the sponsors, retired hog farmer Jimmy Dixon, "has received more than $115,000 from Big Pork," including $36,250 from "donors associated with Murphy-Brown, the company facing more than two dozen federal lawsuits that this legislation would effectively negate."

Not surprisingly, ithe N&O wrote in 1995 that t was former Murphy Farms owner Wendell Murphy who had clear conflicts of interest as a state representative of Duplin County and who, “During that time …co-sponsored or had a hand in several pieces of legislation that benefited the fast-growing hog industry.”

The N&O noted that not only did members of the general assembly get away with conflicts of interest, they got away with "providing uselessly vague information about their financial interests."

The prize-winning reporters concluded that the body needed "to repeal laws that grant unwarranted special privileges to the pork industry and enact decent environmental safeguards" and also emphasized that the "legislature has a collective responsibility to the public to be a good steward of its members' ethics."

And yet over 20 years later, it’s business as usual.

Duplin County activist Devon Halls told the Charlotte Observer he’s not looking to put anybody out of business. He and residents he represents just want the farms cleaned up.

And that’s the least NC Legislators can do.

We, the undersigned, demand that the NC legislature stop sticking it to the minorities who live with hog farm stench - clean up stench in the farms and the stench within the General Assembly!