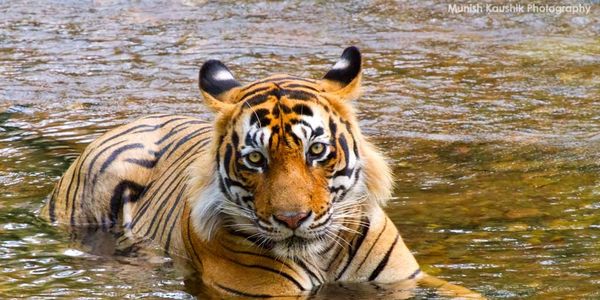 "King of Ranthambore" Dying in a Zoo, Unable to Protect Cubs - Return Tiger T24 to the Wild!

One week ago, this 9-year old wild tiger, popularly known as "Ustad", ruled a territory the size of New York City in the forests of Ranthambore National Park. Today, he is starving to death in a tiny zoo enclosure 300 miles away, unable to protect his family - tigress Noor and her two ten-month-old cubs - from being killed.

Ustad's crime? Being a wild animal.

Ustad, known officially as tiger T24, was the largest tiger at Ranthambore, and was known for being particularly bold around humans. Poachers and loggers didn't dare enter his forest out of fear for their lives. A local hotel manager claims that Ustad did the work of 100 forest guards.

Unfortunately, on May 9, forest guard Rampal Saini was fatally mauled by a tiger in the park. Details are not known, but it is presumed that the man was killed while squatting to relieve himself - a posture which often causes tigers to mistake humans for deer. The fact that Saini's body had not been dragged away proves that the tiger did not intend to eat the man - but Ustad was sighted in the area an hour and a half later and quickly labeled a "man-eater", even though there was no other evidence linking him to the attack.

On Friday, Forest Minister Raj Kumar Rinwa promised that a decision on Ustad’s fate would be taken only after careful consideration by a four-member committee and approval from Chief Minister Vasundhara Raje. But the Forestry Department broke its promise and violated all conservation procedures at the request of the area's powerful hotel lobby, which does not want tigers frightening away guests. A Standard Operating Procedure (SOP) issued by India's National Tiger Conservation Authority states that "under no circumstances, a tiger should be eliminated by invoking the Wildlife [Protection] Act, 1972, if it is not habituated for causing human death".

Reserve officials did not seek permission from India's National Tiger Conservation Authority (NTCA) before capturing Ustad, claiming that "We don't require permission. The chief wildlife warden can authorize the relocation."

So, at around 10:30 am on Saturday, before consulting with specialists, forestry officials tranquilized Ustad while he was eating a deer he had killed, even though big cat experts insist that the temperature was far too high to safely do so. It was only due to sheer luck that the tiger survived the tranquilizer, the blistering heat, and the 11-hour drive to the Sajjangarh Biological Park in Udaipur. But being taken from his forest home and imprisoned in a zoo has stressed Ustad so much that he is now refusing to eat, and officials are worried that he may die in captivity.

Justifying their decision, the forest department officials said that Ustad had claimed four human lives in five years, and that it was dangerous to allow him to remain in the wild. But conservationists note that, out of the four fatalities, Ustad's involvement could only proven in one of them - and that humans, not tigers, are to blame for most attacks.

National Parks are intended to protect wildlife, but there is no regulation of tourist traffic in Ranthambore. Over 50 gas-powered vehicles carry around 2,000 tourists through the tigers' home on a daily basis. These tourists not only carry food with them, but unlike many other well-monitored sanctuaries, they make a lot of noise and often get far too close to tigers and their offspring. The shy predators then attack humans in defense of themselves, their territory, and their cubs. And, because adjacent preserves haven't been managed for tigers, and corridors haven't been built to allow the tigers access to them, Ranthambore is home to twice as many tigers as it has room for. This causes the cats to be "pushed out", where they come into conflict with people. The best way to reduce human-tiger conflict is to better manage Ranthambore and adjacent sanctuaries - not to punish the tigers for being tigers. Even A. C. Chaubey, the former chief wildlife warden, says that "without observing the tiger's behaviour, it should not be sent in exile and deprived of its natural habitat."

If Ustad is not released back into the wild soon, he will starve to death in a cage - and his family could be killed by other tigers. Sign this petition to urge the Forestry Department to abide by proper conservation procedures and return the King of Ranthambore to his jungle home.

I was angered to learn that tiger T24, also known as "Ustad", has been shifted from his forest home in Ranthambore National Park to a small enclosure in Sajjangarh Biological Park in Udaipur. This unscientific decision was taken against the advice of conservation authorities, and it has put T24, as well as his mate and offspring, at risk of death. It also raises serious questions about the Forestry Department's capability to properly manage Ranthambore in a way which keeps both humans and wildlife safe. Tiger experts, conservationists, and thousands of concerned people from across the globe urge you to return T24 to his home territory as soon as possible.

The death of Mr. Rampal Saini is a true tragedy, and there is no question that human life should always take precedence over that of a tiger's. But, while true "man-eaters" must be dealt with in order to protect both human and animal life, the NCTA's Standard Operating Procedure states that "under no circumstances, a tiger should be eliminated by invoking the Wildlife [Protection] Act, 1972, if it is not habituated for causing human death". There is simply not enough proof that T24 was responsible for the death of Mr. Saini. The only "evidence" was a sighting of T24 in a nearby area over an hour after the incident took place. This is not even enough proof to indict a human criminal. It is equally possible that tiger T72 could have been responsible for the incident, as the two tigers share the same territory. Two of the three other human deaths currently attributed to T24 were never conclusively proven to be linked to him, and the third could potentially be explained by human interference in the tigers' habitat.

National Parks are intended to protect wildlife, but there is no regulation of tourist traffic in Ranthambore. Over 50 petrol-powered vehicles carry around 2,000 tourists through the tigers' home on a daily basis. These tourists not only carry food with them, but, unlike many other well-monitored sanctuaries, they make a lot of noise and often get far too close to tigers and their offspring. This stresses the animals, which then attack humans in defense of themselves, their territory, and their cubs. Better management of human activity in Ranthambore has the potential to greatly decrease tiger attacks within the park. Furthermore, as Ranthambore's tiger populations are above carrying capacity, development of a prey base in adjacent parks and construction of corridors will allow sub-adult individuals to disperse to other reserves, reducing human-animal conflict.

Professional conservationists agree that the best way to reduce human-tiger conflict is through improved management of Ranthambore and adjacent sanctuaries. We must avoid punishing the tigers for being tigers. Even A. C. Chaubey, the former chief wildlife warden, says that "without observing the tiger's behaviour, it should not be sent in exile and deprived of its natural habitat."

Right now, the former King of Ranthambore is suffering in a zoo cage. He is refusing to eat, and may die if he is not released. Even worse is that his tigress and their two ten month old cubs are now without his protection, and risk being killed when rival males move into T24's territory. You, sir, have the power to save them.

I, along with biologists, conservationists, and thousands of concerned citizens from across the world, implore you to pursue better management strategies for Ranthambore National Park, and to return T24 to his home immediately. To do otherwise would be a great tragedy, not just for T24 and his family, but for tiger conservation everywhere.

Care2
"King of Ranthambore" Dying in a Zoo, Unable to Protect Cubs - Return Tiger T24 to the Wild!
SHARETWEET