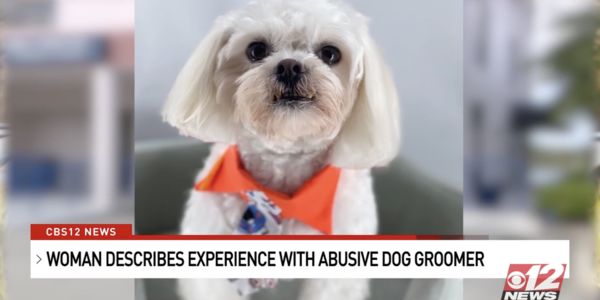 A Dog Groomer Punched, Choked, and Abused Animals Until They Trembled in Fear.

Barley the dog was three years old and a beloved member of his family in Florida. Thinking she was providing her dog with a wonderful, caring service, his human mom began bringing him to the American Dog Pet Grooming facility nearby twice per month.

But then Barley's mom saw video evidence of the facility's co-owner punching her dog directly in the head, using a closed fist. Then he punched Barley again.

Barley's mom was beside herself with distress when she learned how her dog had been abused. She started wondering if her dog's recent anxiety and fear of being alone might be related to the trauma he'd endured. In fact, Barley's anxiety had gotten so bad, doctors had actually prescribed him multiple medications.

And it turns out, Barley was just one of many dogs this man abused. Multiple employees resigned because they were so disturbed by what they saw. Then one employee began taking undercover videos to record evidence of this man's cruelty.

In one case, a video shows the co-owner "grabbing the dog by the back of the head, pulling the dog's hair, and pushing the dog down in the sink." Detectives interviewed one witness who said that dogs at the facility "tremble in fear and often cry" when the perpetrator groomed them.

Detectives learned of this man's intolerable conduct after an anonymous caller made a complaint that the American Dog Pet Grooming co-owner "manhandles, chokes, and punches animals." The caller also alleged that one dog died as a result of the abuse.

Luckily, authorities have now arrested the man on animal cruelty charges. But we must make sure he is never able to work with, own, or live with animals ever again!

Sign the petition to demand that authorities ban this serial animal abuser from ever owning, living with, or working with animals in the future!
Sign Petition
SHAREShare With FriendsTWEETEMAILEMBED
Sign Petition
See more petitions:
You have JavaScript disabled. Without it, our site might not function properly.

Care2
A Dog Groomer Punched, Choked, and Abused Animals Until They Trembled in Fear.
SHARETWEET