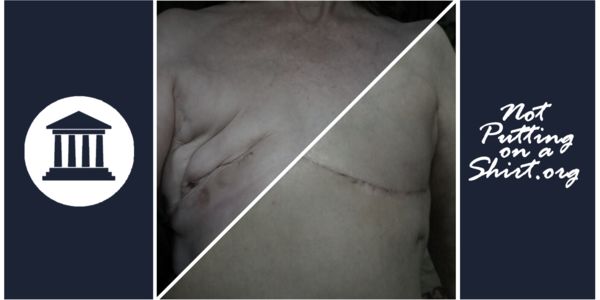 Women who choose to go flat after mastectomy (whether at their initial surgery or after explant) deserve to have their informed consent respected and to receive an aesthetic surgical result (a flat closure) that is covered by insurance.

I'm signing in support of countless mastectomy patients who chose to forgo breast reconstruction, instantly saving their health insurance companies thousands if not tens of thousands of dollars. These patients are most often "one and done." However, sometimes they require additional "revision" surgery to produce an aesthetic result that they can live with (explant patients may also require revision). Revision can involve removing excess tissue and/or other contouring procedures to produce a smooth result.

It seems that insurance companies often refuse to cover these revision surgeries, stating that they are "cosmetic" rather than reconstructive, and therefore are not covered by the Women's Health and Cancer Rights Act (WHCRA, 1998).

These women end up having to spend their limited time and energy fighting their insurance company while recovering from major surgery, just to get the care that they need to move on with their lives.

The fact is that women who choose to go flat after mastectomy often face an uphill battle from the outset, trying to ensure their wishes are respected. Too often, if the option to go flat is mentioned at all, it's cast as a choice that's "less than." And in terms of getting a result they can live with, many women don't have the ability to fight their insurance company during their surgical recovery. So they are forced to live with a "mangled" chest. Whereas their sisters who choose breast reconstruction have their two, three, even up to nine or more surgeries covered by insurance without any suggestion that their surgeries are "cosmetic".

"Insurance companies consider this [revision] surgery "cosmetic" when all we want is to have a smooth chest instead of pockets of excess skin or "dog ears" under the arms that can cause serious irritation, or worse yet, a completely botched closure that looks like something from a Frankenstein movie. Some surgeons leave extra skin "just in case" a woman changes her mind about reconstruction when she has already requested a flat closure (another argument for another time).

It's hard enough to have a double mastectomy due to breast cancer, but to have to fight insurance just to be able to look halfway decent and be somewhat comfortable in your own skin is wrong." (Anonymous Patient, November 2019)

Flat closure does not rebuild the shape of the breast, but it DOES correct a deformity caused by the mastectomy - it restores the normal anatomic contour of the chest wall (hence, "chest wall reconstruction") - and therefore it is truly reconstructive (NOT cosmetic) and should be covered by the WHCRA, in order to fulfill that legislation's original intent.

One in eight women will face a breast cancer diagnosis in their lifetime. And four out of five women over the age of 60 who have mastectomies, decide to go flat. That's a lot of women potentially facing suboptimal care and additional hardship at one of the most vulnerable times in their lives. According to Not Putting on a Shirt's research, which will be presented at the San Antonio Breast Cancer Symposium this December, one in four women going flat receives an unsatisfactory aesthetic result, and 1 in 20 are intentionally denied by a surgeon who believes they will "change their mind" about implant reconstruction and so disregards their consent. There is a lot of room for improvement here.

Amending the WHCRA to include insurance coverage for flat closure (chest wall reconstruction) will be a critical step in ensuring these women receive the care they deserve.

Learn more, or write a letter to your legislators!