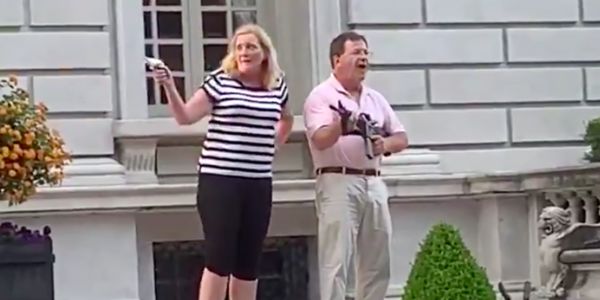 Peaceful Protestors Walked By, So These Lawyers Busted Out the Guns

Update 8/24/2020: Trump says he cares about "law and order," but that's clearly NOT the case. The St. Louis couple who recklessly brandished guns and threatened the lives of peaceful protesters — in violation of both state AND federal laws — will be featured speakers during the Republican National Convention this week.

These individuals committed felony offenses, making them the exact opposite of "law-abiding citizens," yet they will be glorified and applauded by Trump's party. Sign the petition to demand this couple face real consequences for their dangerous actions, now!

Walking by someone else's house en route to another destination is not a crime in this country. Brandishing a weapon, however, is a crime — and one that Mark and Patricia McCloskey should know about, seeing as they're both lawyers. Yet that didn't stop this couple from openly threatening peaceful pedestrians who were passing by on their way to a protest at the Mayor's residence to support Black Lives Matter.

As civilians walked by, Mark and Patricia watched from inside their home, quickly becoming hysterical and thinking their home would, for some nonsensical reason, be invaded. Ridiculously fearing a new "storming [of] the Bastille," as Mark later told a local news station, the couple rushed to grab their guns — a semiautomatic rifle and a pistol. Then, they turned these weapons on the passersby outside.

These two lawyers just broke the law and have shown no remorse. They are clearly not competent to remain attorneys. Demand that the state of Missouri disbar Mark and Patricia McCloskey, now!

Pointing their military-grade rifle and handgun at the marchers, while standing outside their gigantic white stone mansion, the McCloskeys stared the peaceful activists down with what can only be described as white rage. In this country, white rage is a death threat. Not only did Patricia and Mark wield their guns, showing off their tremendous, expensive, and deadly firepower — Patricia was also poised to fire on the Black Lives Matter supporters, with her finger on the trigger. This goes against all gun safety protocol, which the couple was clearly not versed in. Video shows the couple pointing their guns so carelessly that they often were aiming directly at each other. What incompetence.

According to federal U.S. law, brandishing is defined as using a "dangerous weapon (including a firearm)" to "intimidate" or threaten someone. More specifically, Missouri state law prohibits "exhibit[ing], in the presence of one or more persons, any weapon readily capable of lethal use in an angry or threatening manner." Doing so is a class E felony. And the McCloskeys most certainly violated that law. The video and photo evidence from that day is undeniable.

Afterward, Mark McCloskey spun a melodramatic lie to justify endangering these peaceful protesters' lives. He called them "terrorists" and falsely claimed that "A mob of at least 100 smashed through the historical wrought iron gates of [our house, named] Portland Place, destroying them, rushed towards my home where my family was having dinner."

This is all simply untrue. Multiple marchers were taking video during the whole ordeal, so there is definitive recorded evidence that the "horrors" Mark spoke of never happened. No one was trespassing, not even on the lawn. It's a straight-up fabrication. In fact, despite the aggression the McCloskeys showed, the protesters never retaliated and remained completely peaceful and calm throughout.

But no legal action has been taken against the McCloskeys yet, even though they committed a felony criminal offense. This is unacceptable. Even more ridiculous, Patricia McCloskey is actually a member of the Missouri Bar Association Ethical Review Panel. This couple has no business being involved in Missouri's legal system. It's time to get them out.

If this couple had been Black, imagine how quickly the media and local authorities would have turned on them. Police shot Tamir Rice, a child, dead simply for having and playing with a toy gun. Meanwhile, these two adults actively threatened a whole group of people with actual guns and there have been no repercussions.

Demand that criminal, gun-brandishing lawyer couple be disbarred from ever practicing the law again!
Sign Petition
SHAREShare this petition with friends!TWEETEMAILEMBED
Sign Petition
See more petitions:
You have JavaScript disabled. Without it, our site might not function properly.

Care2
Peaceful Protestors Walked By, So These Lawyers Busted Out the Guns
SHARETWEET