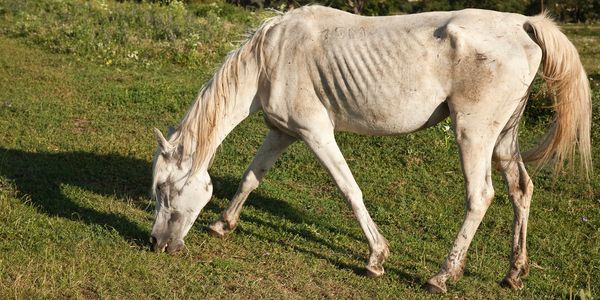 Just as 2022 was getting underway, an animal cruelty case of harrowing magnitude was discovered in Colorado. At a place called Snow Mountain Stables, over 150 horses were wallowing in misery. 144 were so sick, emaciated, or injured that they were rushed to an equine center to receive the care they desperately needed. One poor horse was suffering from "emaciation and severe, untreated injuries" so grave that it had to be euthanized. And shockingly, 38 horses were left with the owner who did this to their fellow equines.

Sign the petition to demand that those 38 horses be seized at once, and that the district attorney file charges against Snow Mountain Stables and the people responsible for this suffering!

"Only" 144 horses may have been in bad enough shape to be seized and transported to safety, but the remaining 38 are arguably in just as much danger – you need look no further than the conditions of the seized horses to tell you that.

144 is an astronomical number of horses to be sick, injured, or starved enough to need immediate veterinary care. And according to a statement from the local sheriff's office, many had "a long road to recovery" yet. They are safe now, but not as much can be said for one horse who was found alongside them at the property. Starvation and long-ignored wounds had brought on too much pain and suffering already, and the poor thing couldn't be transported to receive care. Rescuers had to make the impossible decision to end its misery and euthanize it at the stables.

Seeing all of this, it is hard to understand how officials made the decision to leave 38 horses behind. But we cannot rest until they are safely reunited with the other 144 at Dumb Friends League Harmony Equine Center.

We must demand justice, and that no horse be left behind. Sign the petition asking that DA Matt Karzen file charges against all responsible parties at Snow Mountain Stables, and order that the remaining 38 horses there be seized immediately!
Sign Petition
SHAREShare this petition with friends!TWEETEMAILEMBED
Sign Petition
See more petitions:
You have JavaScript disabled. Without it, our site might not function properly.