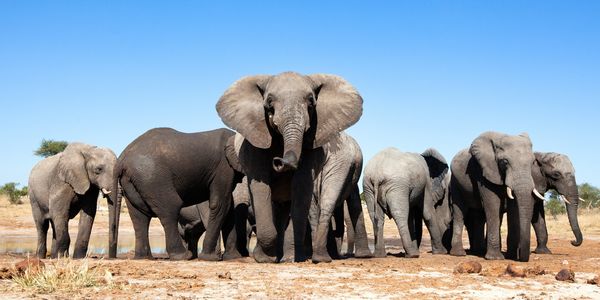 The African elephant. The iconic creature is the number one largest animal that roams the globe alongside humans. And thanks to those humans, it's also one of the most endangered.

And now, at the most critical point in African elephant conservation, a Canadian oil company wants to take 34,000 square kilometers, or over 13,000 square miles, of elephant habitat in Africa and turn it into a desolate, poisonous oil field. The lives of 130,000 elephants hang in the balance.

Sign the petition and ask that the governments of Namibia and Botswana take a stand and deny ReconAfrica the permits for this dangerous project!

We've developed the lands these elephants live on and feed from, robbing them of vital habitat and then killing them when they come too close to us. We call it human-elephant conflict, but it's no fault of the elephants'. That, coupled with a historic and horrific rise in ivory poaching in the 21st century, has driven African elephant populations down from millions to mere thousands. And now, ReconAfrica wants to rip apart even more elephant habitat across Namibia and Botswana in order to suck unsustainable, earth-warming fossil fuels from the earth.

Oil development like this obviously takes a toll on any ecosystem -- spills and leaks are almost guaranteed to contaminate water supplies and soil that local communities depend on for sustenance and work.

But elephant habitat is particularly vulnerable. Noise, vibrations, and other disturbances from construction and exploratory work are known to terrify and drive away elephants. In fact, certain noises like these are literally used to deter the creatures from farms and villages -- how horrific will it be for these disturbances to show up in the middle of these elephants' safe havens? Fleeing the areas and migratory routes they have used for centuries will stop these elephants from thriving, making it harder for them to find food, shelter, and keep their communities together while driving them closer to human areas where they will be killed for their crime of trying to survive.

Less than half a million Africa elephants exist today. And this irresponsible, damaging oilfield would sit on the habitat of over 25% of them. We cannot afford to lose another elephant's life to human development! And we certainly don't need to invest any more time, money, or blood into a dying oil industry that is warming our world so fast that we will soon reach the point of no return.

Sign the petition and ask that Namibia and Botswana protect these elephants, the lands of their people, and the entire world by putting an end to ReconAfrica's oilfield plans!