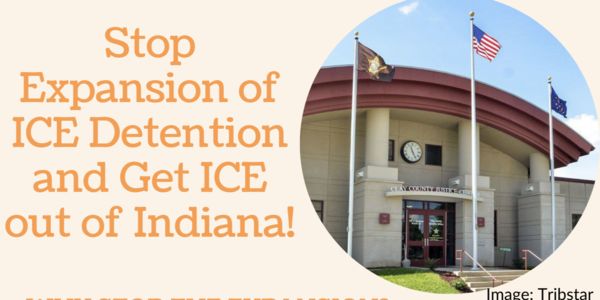 Stop Expansion of ICE Detention and Get ICE out of Indiana!

On May 24, 2021, three County Commissioners in Clay County (a small county in central western Indiana) took the first steps towards nearly TRIPLING the number of immigrants that can be held in Immigration and Customs Enforcement ("ICE") custody in the state. Read below to learn how this expansion proposal threatens not only immigrants in Indiana but the entire Midwest. Then sign this petition and share with your communities to call on County Commissioner President Marty Heffner, County Commissioner Bryan Allender, and County Commissioner Paul Sniders to cease their plans to expand the facility immediately!

WHY SHOULD WE STOP THIS EXPANSION?
Immigration detention is not a solution to our federal immigration policy issues, and Hoosiers will not stand for our county governments colluding with ICE to jail our families, friends, neighbors, and coworkers. ICE has shown itself to lack transparency and accountability and to waste taxpayer dollars by preying on our communities. The solution is to #AbolishICE and #KeepFamiliesTogether, not serve as accomplices in their enforcement tactics in the Midwest.

The county board's move comes on the heels of Midwestern community efforts this spring to cancel the ICE contract at McHenry County Jail, where many immigrants from Indiana are held in ICE custody in Illinois. On May 31, 2021, the Illinois General Assembly passed a bill to end all county contracts with ICE. When the Illinois governor signs the bill, the three IL jails that currently contract with ICE will be required to terminate their contracts no later than January 1, 2022, putting ICE in a bind. Many immigrants from Indiana are currently held in these facilities..

As Hoosiers, we must now stand alongside our Illinois neighbors and demand that Clay County Commissioners not only cease efforts to expand but cancel their contract with the US Marshals and #GetICEOutofIN!

WHAT IS THE STATUS OF ICE DETENTION IN INDIANA RIGHT NOW?
In 2006, the Clay County Jail was built with a maximum capacity of 176 beds and, according to The Brazil Times, designed "more extensively than needed at that time." Since August 2013, ICE has detained immigrants at the jail through a contract with the US Marshals Service. Data from 2019 and 2020 show that the number of individuals in ICE custody at Clay County has ranged from 26 to 102 with the average between 50 and 60 people on most days.

This is the only facility in Indiana with a contract to hold people in ICE detention for longer than 48 hours (which is the length of time that other county jails can "hold" non-citizens in criminal custody on a "detainer" for ICE or another federal agency). It serves as a transit detention center among the states under the Chicago ICE Field Office, which oversees ICE enforcement actions in Indiana, Illinois, Wisconsin, and Kentucky.

WHO IS HELD IN ICE CUSTODY IN CLAY COUNTY?
Because the county's contract is with the US Marshall's Service and not ICE, usually individuals spend a maximum of 5-10 days at Clay County Jail before being transferred to facilities in Illinois (for now), Kentucky, or Wisconsin, where ICE has contracts to hold individuals in county jails for indefinite periods of time.

Many individuals held at Clay County Jail are Hoosiers residing and working in Indiana, but they could also be residents of other Midwestern states like Kentucky, Illinois, Wisconsin, or Missouri being transferred between facilities. Historically, according to ICE data, the largest number of individuals held in ICE custody from Indiana are from Marion County.

Notably, these transfers have led to widespread COVID outbreaks in the jails throughout the pandemic, including at Clay County Jail in spring 2021.

WHAT WOULD THE 2021 CLAY COUNTY EXPANSION DO?
According to news reports and the proposal documents, the expansion project would include constructing a 38,000 square foot building with between 275-300 bed housing pods connected to the existing facility. This would be a 170% increase in ADDITIONAL beds--nearly tripling the size of the current facility. Clay County has announced it plans to contract to fill these beds with individuals in ICE custody. If approved, the County intends to start the project in December 2021.

WHY IS AN INDIANA COUNTY CONSIDERING DOING THIS?
ICE contracts can be big money makers for county governments, bringing in millions of dollars. The proposal for this project purports that it would add 33 new jobs for the County. These contracts can be a draw for rural counties like Clay, which have struggled financially even before the pandemic. The project would also benefit companies such as BW Development, GM Development, Garmong Construction Services, and architecture firm RQAW, which has submitted the only proposal received by the county for the project, with an estimated cost of $20 million.

Multiple other communities in Indiana have considered proposals for ICE detention facilities in recent years, including Hobart, Gary, Roselawn, and Elkhart Counties. As a result of community pressure, these proposals failed.

WHY IS THIS EXPANSION CONCERNING FOR INDIANA IMMIGRANT COMMUNITIES AND ADVOCATES?
Attorneys and community members report that Clay County Jail has been violating its current contract with the US Marshalls Service by regularly holding individuals in their facility beyond 10 days. This causes many problems. For example, Clay County is the only jail in the Midwest lacking televideo access to the Chicago Immigration Court, forcing detainees to have their hearings telephonically before an immigration judge they cannot even see. Detainees also have limited access to attorneys and "know your rights" information, making it more difficult to make informed choices about whether to fight their cases.

In addition to all of these problems, there is evidence of significant human rights violations during the pandemic, which resulted in a COVID-19 outbreak this spring. You can read reporting on the outbreak from The Indianapolis Star here.

This lack of precautions, COVID-19 prevention, and medical care -- especially at a facility where transfers are common -- not only affects the immigrants held in ICE custody, but also the jail staff and community members in Clay County who interact with them.

HOW CAN I LEARN MORE AND GET INVOLVED IN THIS FIGHT?
By signing this petition, you will receive periodic updates this summer and fall about organizing efforts and any public hearings in Clay County that we become aware of.

For additional information, you can also follow us at:

I WANT TO HELP NOW, WHAT CAN I DO?
(1) Sign the petition now, and share it with friends.
(2) Start and share conversations about #GetICEOutofIN on social media.
(3) Contact potential allies in Clay County. Ask if they are willing to help.
(4) Donate to the Midwest Immigration Bond Fund (MIBF) MIBF is a revolving fund that pays bond to ensure detainees' release. When detention facilities close, detained individuals are often transferred to other ICE facilities rather than released. Your donation will help to ensure our detained neighbors can free themselves before the Illinois jails close.

Care2
Stop Expansion of ICE Detention and Get ICE out of Indiana!
SHARETWEET