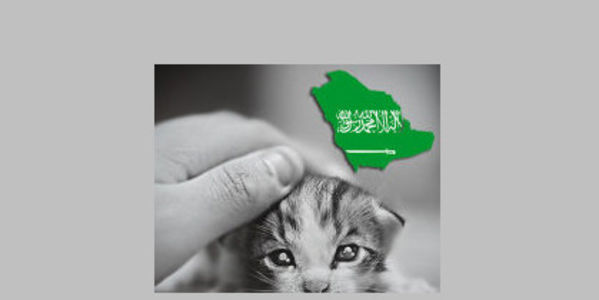 In this country some ignorant individuals torture and abuse Stray animals, they use violence against animals for their own amusement and with no mercy. Our goal is to create a law that will prevent them from harming any animal.

Arab and Gulf countries have strict laws against animal cruelty; anyone who inhumanely beats or intentionally kills any domesticated animal may be jailed or fined. How come in Saudi Arabia a, country that prides itself on using a legal system based on the sharia and Islamic law, there are no laws to protect animals from cruelty yet. Although the prophet Mohammed peace be upon him clearly and explicitly prohibited animal abuse or animal neglect

what is more shameful is that if any one of us passed by a person hitting or kicking a stray cat even if we stopped him this person wouldn't be held legally responsible for his despicable actions, knowing there will be no repercussions for this kind of behavior is unacceptable.

what prompted me to write this is that Recently a friend of mine had her cats beaten to death by her neighbor and his son, and just a couple of weeks ago I received a very graphic picture depicting a cat hung from a tree at a public park with a bunch of Saudi teens posing proudly in front of the tree, the cat looked tortured and mutilated by sharp objects.

These kind of images takes me a couple of years back when a famous video circulated around the country of a group of men burning a dog to death , people were moved to tears at this traumatic scene but nothing was ever done to punish the abusers .