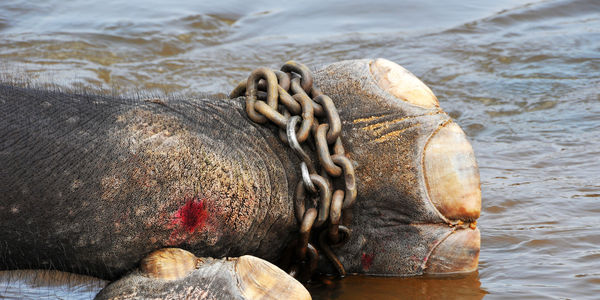 This Elephant Screamed Out in Pain, But They Continued to Beat Him

Sickening footage recently surfaced of a captive elephant, Myan Prince, enduring atrocities inflicted by his captors at a Buddhist Temple near Colombo, Sri Lanka. In the gut-wrenching video, Myan Prince screams in pain as a man beats him. The elephant is not only tightly chained by his back leg but has also collapsed into a dirty pool of water. He has nowhere to go, no way to fight, and seemingly no will to live, yet the man continues to beat him.

Sign the petition and demand that the Sri Lankan government change its laws so that elephants cannot be kept in captivity for human entertainment! Myan Prince and all other elephants like him must be released to sanctuaries.

Myan Prince is one of an estimated 250 captive elephants in Sri Lanka. This number is growing. His wild counterparts number about 4,000 and are extremely endangered. This number is, sadly, shrinking, and at an alarmingly fast rate. Although the practice is illegal in Sri Lanka, experts believe elephants are still being stolen from the wild and made captive to serve as symbols of entertainment and wealth. In other words, these gentle giants will meet a similar fate to Myan Prince.

It is no exaggeration to say the past couple of centuries have been unkind to Sri Lankan elephants - since the turn of the 19th century, the country's elephant population has plummeted by 65%. Now, more than 100 years later, the misfortune of these beautiful creatures does not look to be tapering off. In 2019, 361 elephants were killed, and approximately 85% of these deaths were murders at the hands of humans through brutal methods such as poison, explosives, electric fences, and shootings. Unfortunately, based on the footage of Myan Prince, it looks like captivity and torture may soon be added to that list.

Sri Lanka needs to focus its efforts on the protection and conservation of these precious animals instead of allowing them to be plucked from the wild and treated so abhorrently. Please use your voice to beg for Myan Prince's life and the lives of so many elephants like him. Tell Sri Lanka to ban the ownership of captive elephants and to release Myan Prince to the safety of a sanctuary!
Sign Petition
SHAREShare this petition with friends!TWEETEMAILEMBED
Sign Petition
See more petitions:
You have JavaScript disabled. Without it, our site might not function properly.

Care2
This Elephant Screamed Out in Pain, But They Continued to Beat Him
SHARETWEET