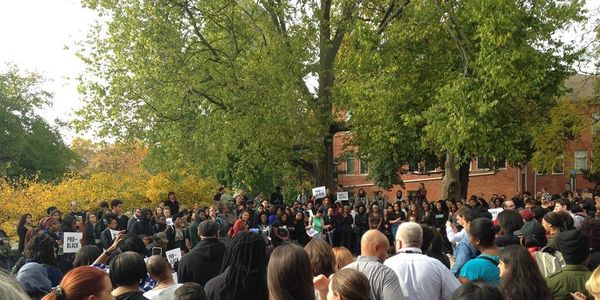 Thank you all for taking action on this matter, and please continue to inform people of this petition - we need your help.

Unfortunately, the EMU administration has charged a fourth student with violations of the Student Code and Conduct. On Friday, 4 November, and Monday, 7 November, three students were charged with violations that include, but are not limited to, aiding and abetting, trespassing, and disturbing the peace. A fourth student was charged on November 8th. The students now face disciplinary action that includes the possibility of year-long suspensions or expulsions.

All violations stem from the sit-in at the EMU Student Center on Tuesday, 1 November, and into the early hours of Wednesday, 2 November. Of the dozens of students who participated in the sin-in, the three students were hand selected by the EMU administration and Department of Public Safety because they were perceived as leaders of the protests that have taken place on campus. As one student commented, “they [administration] are cutting the heads off the leaders to thwart further protests against hatred.” This is unacceptable.

Please continue to spread awareness of this petition. Although the university is not budging, we are not standing down, and we will continue to fight for our students.

The administration of Eastern Michigan University has charged students who have engaged in peaceful protest against racial hatred with violations of the Student Code of Conduct and threatened them with expulsion. We are deeply disturbed by such actions which are reminiscent of racist policies used 50-60 years ago during the Civil Rights Movement to silence and punish those protesting racial hatred, bigotry, and narrow-mindedness.

It is appalling that the administration is employing similar tactics in an attempt to strike fear into our students who are standing against racial hatred. Threatening students with arrest, incarceration, and expulsion from an institution of higher learning is not acceptable and must be halted immediately.

The University, as an institution of higher education dedicated to the betterment of society, should stand with students, and to support their right to assemble peacefully. Indeed, EMU should show solidarity with all students threatened by any form of bigotry. An intellectual community opposed to racial hatred should stand in solidarity with those who are threatened. Indeed, it should be the beacon of hope and security that students need during these trying times.

We demand that the EMU administration put an immediate halt to all actions against the students who have protested the racist threats made against them. Further, the Office of Student Conduct, Community Standards and Wellness must immediately drop all charges against all students who have exercised their First Amendment right to assemble peaceably in response to the racist threats that began in September.

The administration must demonstrate that EMU supports the right of all targets of hatred to protest peacefully. Threats of arrest, incarceration, and expulsion should always be directed toward the perpetrators of hate, not the targets of that hate.