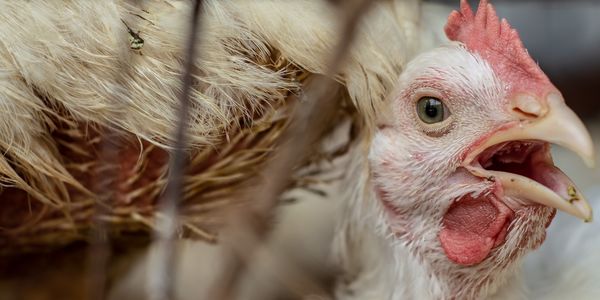 The poultry company Foster Farms states that its policy is "​​to raise chickens free from hunger, discomfort, pain, cages, and distress."

But behind the scenes, their slaughterhouses are a totally different story. The torture, neglect, and horrors that the animals in these facilities face is nearly indescribable, but the animal rights group Direction Action Everywhere (DxE) went undercover to catch hours and hours of footage of the nightmares.

Sign the petition demanding that Foster Farms lose their humane certified status; they must be forced to clean up their act, or lose customers who are unknowingly buying their torture meat!

The footage that DxE obtained was from inside Foster Farms Livingston, California slaughterhouse and is available on YouTube, but discretion should absolutely be taken before watching -- there is a reason animal welfare advocates are up in arms about what happens in it.

Live but "unviable" chickens are thrown into piles of dead ones, where they slowly die -- crushed, suffocating, or drowning under dead bodies, blood, and excrement. Chickens bound for slaughter and consumption try to flee, falling off of the table where they will be shackled by their feet and hung upside down. They fall into the piles of their dead and dying peers, and employees snatch them back up without inspecting them to make sure they are not the dead or sick below.

There is a reason employees go so quickly, cruelly, and clumsily through this process -- they are expected to hang nearly one chicken every three seconds, crammed into tight quarters with other employees doing the same. These breakneck speeds and crowded conditions actually led to a massive COVID-19 outbreak among slaughterhouse employees earlier in the pandemic. Foster Farms clearly doesn't care about any living being, animal or human.

After the chickens are hung, alive and terrified, upside down, the conveyor belt takes them to electrifying water tubs that they will be submerged in and stunned unconscious by -- but the video shows that many are left conscious, able to squirm their heads above the surface, destined to be sliced open while totally awake and fully feeling. Still more chickens that are conscious wriggle away from the automated neck-slicer meant to kill them, meaning they are grabbed by employees and slit open by hand. If this sounds traumatic, or watching the video is upsetting, imagine going through this ordeal in real life.

This isn't the first time Foster Farms has been accused of animal cruelty -- in 2015, undercover footage showed their chickens being thrown, scalded alive, and undergoing many other abuses. And yet the American Humane Association (AHA) has allowed Foster Farms to remain certified with them, giving the illusion of animal welfare where there clearly is none!

The American Humane Association (AHA)'s claims it is trying to make it possible for consumers to choose cruelty-free animal products. But by allowing Foster Farms to remain AHA certified, they are deceiving consumers. Demand the AHA remove Foster Farm's certification at once, and start the chain of action that would actually increase animal welfare in factory farming!