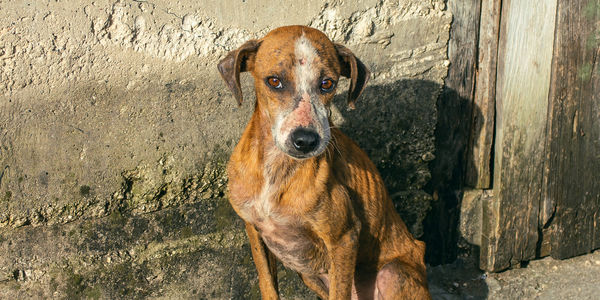 Authorities recently seized approximately 300 dogs from a kennel owner and his ex-wife in Las Vegas, Nevada. Since 2010, the man has held a permit for selling and training canines. Also since that time, he's been breaking the law. And now, countless dogs have paid for it - with their lives.

When this breeder originally gained his selling permits, authorities limited him to only keeping 30 dogs on his property. Regardless, the man accumulated more and more and more pups at his kennel, until neighbors, a postal mail carrier, and his own staff started submitting complaints to local officials. Despite that, he eventually purchased a second plot of land nearby - and he packed it full with upwards of 250 dogs.

And he didn't just accumulate dogs. He abused them, too. Expert accounts reveal that, for years, he starved the dogs to the point of severe malnutrition and emaciation. Many animals were maimed or covered in injuries, consistent with forced dog-fighting. Some had broken legs, others had gaping open wounds on their necks, while still more demonstrated lacerations on their lips and necks. Perhaps most gruesome of all, investigators noticed that many dogs were missing feet.

Worst of all, records from the past 7 years show that authorities knew about this problem! But due to the inconvenience of finding veterinary care and new homes for hundreds of dogs, they continually ignored the situation.

When officials finally did come through the property, what they found was grim. Dogs were crammed together, with multiple animals squished into a crate at a time. On one property alone, the man had dug 4 mass grave sites for the animals. One of those graves contained the remains of 26 dogs. Detectives revealed that, over the course of several months, the man had cremated another 90 animals.

And then, there were the freezers. Investigators discovered 24 puppies, dead, stashed away in a freezer on one property. Inside sources allege that the man was using the dead frozen pups as meals for the larger animals.

Authorities have now charged both the man and his ex-wife with animal cruelty. But the people of Las Vegas are demanding answers to why officials allowed such heinous abuse to occur in the first place. Internal documents show repeated conversations between police and commissioners over the years, trying to decide whether or not to intervene and save the animals. Each time, for years, they decided the answer was "no."

This breeder didn't collect and murder animals on his own. He did so with the implicit help of local authorities, who knew about the animal torture and continued to allow it. They are complicit in what he ultimately did. Las Vegas authorities must be held accountable! Demand a full independent investigation of this corruption!
Sign Petition
SHAREShare With FriendsTWEETEMAILEMBED
Sign Petition
See more petitions:
You have JavaScript disabled. Without it, our site might not function properly.