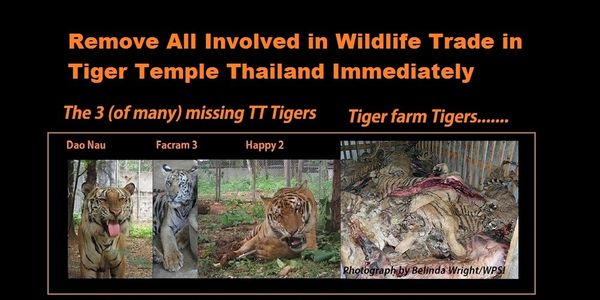 It is a breach of the CITES agreement and the Thai Wildlife Law to conduct wildlife trading of Tigers or other endangered CITES protected species. Tiger Temple has now admitted to the disappearance of 3 Tigers and are trying to get away with it. ALL those involved and who knew and stayed silent must be removed and brought to justice.

Tiger Temple Thailand has been known to conduct wildlife trade over the last 15 years. These trades have been witnessed by numerous volunteers and staff that came to help in the temple from around the world, and many carrying traumatic emotional scars from what they were subjected to.

The recent absolute evidence of wildlife trade of tigers given by the Ex Tiger Temple Veterinarian regarding the 3 missing Tigers, Dao Nua, Facram 3 and Happy 2, has further resulted in the Tiger Temple admitting to these Tigers vanished and dead.

It is very well known by so many all over the world that Tiger Temple has been conducting wildlife trade and has been investigated and proven for years by various conservation organisations who have investigated and recorded multiple disappearances and severe abuse to animals since 1999.

It is not acceptable that the very man, The Abbot, who not only features as a signature to the 2005 wildlife trade blackmarket agreement with a Laos Tiger Farm, but is well aware of the ongoing and current wildlife trades and abuse be allowed to continue inside the Tiger Temple. It is not acceptable that multiple Tiger Temple staff and some volunteers who were involved  or knowledgable of the wildlife trades being conducted are allowed to continue to work inside the Tiger Temple or in Thailand as if nothing has happened.  There are other good people and honest people who can be employed and trusted to care for the Tigers and other animals, without fear of them "disappearing".

The entire world of true conservationists and animal lovers will come to the aid of these Tigers and protect them as deemed by the CITES agreement, free from wildlife trade.

We ask CITES and Department of National Parks, Wildlife and Plant Conservation Thailand to remove all involved in the wildlife trade and abuse of the Tigers.