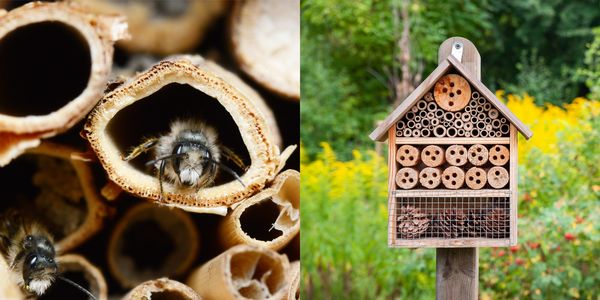 Bee hotels could be the answer to declining bee populations!

No one works harder than the mighty bee. Made up of nearly 20,000 distinct species, the global bee population makes up a huge percentage of pollinators who are responsible for supporting the reproduction of almost 90% of all flowering plants, and nearly 70% of crops.

But because of a whole host of factors, including colony collapse disorder, climate change, and urbanization, bees have been dying at scary rates. But in 2021, the crisis became a lot more clear. Researchers looked at the data and found that as many as 25% of bee species may have been lost since the 1990s.

Sign the petition and ask the United States to get serious about protecting the bees!

Human development like urbanization and industrial farming are responsible for a ton of lost plant and animal life -- degradation of habitats, loss of food sources, and proximity to humans and their roads, pesticides, and pollution have taken a huge toll on biodiversity. But for bees and other pollinators, at least, we have ways to make our human-dominated environments way more hospitable! Just look at what the Netherlands is doing.

In many Dutch cities, you can now find things like 'bee hotels,' 'bee stops,' and 'honey highways.' These may sound like scenes from a children's book about a bumblebee, but in fact they are vital initiatives that are keeping urban bee populations from dying off! 'Bee hotels' or 'bee bed and breakfasts' are constructed from bamboo and other hollow plant trunks and stems, and give bees who are busy pollinating a place to rest and nest. 'Bee stops' are mini gardens of native plants that are built on top of bus stops, otherwise unused and often unattractive spaces, bringing beauty to urban landscapes and food sources to urban bees. And the Honey Highway initiative works with cities to plant wildflowers in normally un- or underused spaces next to roads, waterways, and train tracks, again bringing beauty and bees in one fell swoop.

These initiatives aren't just beautiful ideas -- they are proving really, really effective. Amsterdam, for example, saw a 45% increase in solitary bee species between 2000 and 2015. More recently, thousands of Dutch citizens from many different cities participated in a bee census, spending time in their own gardens and backyards observing and counting bees. A combination of the data showed that over the years, bee numbers have remained steady!

There's a reason the Netherlands has been taking bee conservation so seriously -- pollinators are responsible for reproducing over 60% of the world's crops, and the Netherlands is the second largest global exporter of agricultural goods. Their economy and the global food supply depends on the mighty bee! But is the world's number one agricultural exporter taking the same measures? Who is that, anyway?

It's the United States, whose bee populations have been steadily following the global downward trend. If we want a world with flowering plants and food, the U.S. needs to get serious about keeping urban bee populations diverse, healthy, and around.

Care2
Bee hotels could be the answer to declining bee populations!
SHARETWEET