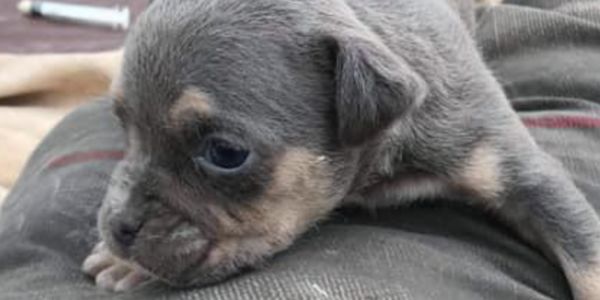 NORTH AMERICA SIGNATURES ONLY.  This is a call for action by those in North America who believes in the humane treatment of animals.

I volunteer for several local and regional animal rescue organizations. I have observed animals in such terrible conditions that it is hard to believe that a human being was the source of their pain and misery.  One terrible example is that of a 4-week-old puppy rescued from horrific conditions in Laurens County, SC in February.

The puppy was critically ill, starved, hypothermic and dehydrated with an infected, broken leg.  A Labor of Love Transport Rescue volunteer rushed him to Upstate Veterinary Specialists, where he soon died.

The volunteer named the puppy Callan.  An investigation into Callan's living conditions revealed a horrific picture of the property that was home to 15 more dogs that were starving and living in mud and waste.  Puppies were severely bloated with intestinal parasites and suffered mutilated ears, abscesses and tumors.  Dogs were chained with padlocks.

Three people who operate a recreational breeding business were arrested and charged.

Regardless of the outcome of this particular case, anyone convicted of animal cruelty in South Carolina is free to own, breed and potentially torture animals once released from custody.

South Carolina is one of a few states in this county that does not have a post-conviction possession ban, which prohibits those who have been convicted of animal abuse from owning, caring for or residing with an animal for a specified period of time, depending on the severity of the crime.

South Carolina consistently ranks in the bottom tier when it comes to laws that protect our animals.

We can and should do so much more.

A possession ban, which I am calling "Callan's Law", would be one of the most effective ways to prevent repeat offenses.  It would also allow law enforcement officials to intervene quickly to protect at-risk animals.

Please join me in asking your state representatives to enact stiffer penalties for those who commit crimes against animals and to pass legislation that prevents the same people from doing the same cruel acts over and over. Find your representatives at www.scstatehouse.gov.