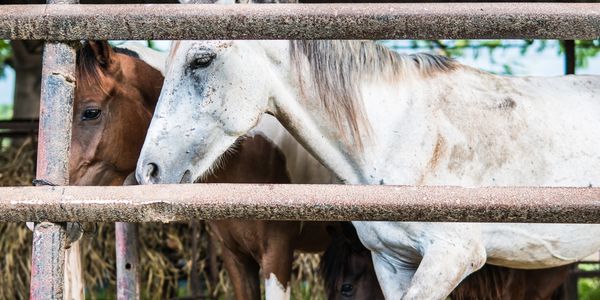 Healthy horses from all over the U.S. are being brutally slaughtered for consumption!

A lesson horse deemed too ornery to do its job. A plow horse that's grown old and a bit weary of working the fields. A racehorse whose days of triumph and glory are behind them. All perfectly healthy, ready to be rehomed to live out their days elsewhere. But instead, each of these horses may very well be sold to slaughterhouses who then torturously murder them and sell their meat to be eaten.

This is the reality for over 100,000 horses in the United States every single year. It's completely legal, and it's completely wrong. Sign the petition demanding that Congress pass the reintroduced Save America's Forgotten Equines (SAFE) Act of 2021!

Although the slaughter of horses is technically banned in the United States, it's on a temporary basis and could come back at any time. And even with this temporary ban in place, there is a thriving auction to slaughter pipeline. The auctions take place in the U.S. and the slaughter is outsourced to Canada or Mexico.

Horse owners who can either no longer afford or be bothered to care for their equine companions or workers sell these poor animals to auction houses. Then, "kill buyers" bid higher prices than rescues or caring horse owners can possibly afford. From there, these sweet, entirely healthy animals endure grueling, hours-long journeys where they are abused, neglected, deprived of food, water, or space, and often injured during transport. Then, once they are out of the country that so callously discarded them, they are clumsily, cruelly slaughtered. Sometimes these poor horses aren't even entirely dead before their bodies are ripped apart to be processed into meat, which is then exported and sold.

Shame on the U.S. for facilitating the disposal of animals that we have domesticated to be our friends, family members, and workmates. There are countless people and organizations that want to give these creatures a second chance at life -- in fact, 80% of people in the U.S. oppose the slaughter of horses for human consumption. And the SAFE Act would reflect these feelings by completely banning the slaughter of horses on U.S. soil as well as outlawing the export of live horses to be slaughtered elsewhere.

Sign the petition asking that Congress pass the SAFE Act without delay, and save the horses!

Care2
Healthy horses from all over the U.S. are being brutally slaughtered for consumption!
SHARETWEET