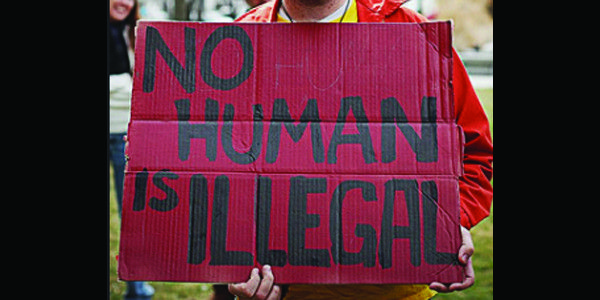 DACA is Ending - Congress Must Pass the DREAM Act

The Trump administration will officially end the Deferred Action for Childhood Arrivals (DACA), a program that protects undocumented immigrants who arrived to the U.S. as children from deportation, on March 5, 2018.

It's urgent that Congress act now to fix this.

If Congress does not figure out an immigration solution immediately, 800,000 so-called "Dreamers" will lose their work authorization and face deportation from the only country they've ever known as their home.

Trump's decision to end DACA is nothing but a cruel, cowardly, racist move. It is an attack on vulnerable members of our society despite their contributions to our culture and economy. Dreamers are an integral part of American life, who deserve to openly call the U.S. home, free from fear of deportation.

To see how Dreamers help strengthen our communities, one need only look at the stories coming out of Texas in the days following Hurricane Harvey. Story after story showed DACA recipients, who now face an uncertain future, risking their lives to save Houston-area residents from flooding.

Jesus Contreras, for example, is a 23-year-old paramedic who worked six-straight days rescuing people from flooding from recent Hurricanes. Then there were Alonso Guillén and Tomas Carreon, two friends who lost their lives while rescuing those caught in the flooding. These are American heroes we need to fight for.

Members of Congress have had a lot to say about protecting Dreamers, but now it's time to back up those words with solid action.

Members of Congress must stand up for American values by passing the bipartisan DREAM Act, protecting Dreamers and offering them a pathway to citizenship.
Sign Petition
SHAREShare With FriendsTWEETEMAILEMBED
Sign Petition
See more petitions:
You have JavaScript disabled. Without it, our site might not function properly.